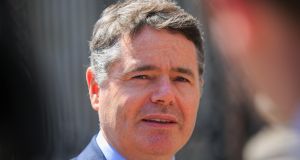 Minister for Finance Paschal Donohoe: ‘I and my party remain absolutely committed to road projects such as the Cork to Limerick project.’ Photograph: Gareth Chaney/Collins

Meanwhile, the Green Party’s deputy leader Catherine Martin has said that if commitments and investment had already been made, then such projects would be likely to go ahead in the lifetime of the next government.

Their comments come after Green Party TD Ossian Smyth had suggested in a tweet on Thursday that the long-awaited construction of the M20 motorway would not happen during the five-yer term.

Mr Donohoe told Newstalk’s Pat Kenny Show that the project was at “a very early stage” but Fine Gael was committed to it.

“In relation to particular road projects, I and my party remain absolutely committed to road projects such as the Cork to Limerick project. We will be very firmly arguing the case for projects like that and indeed, in the programme for government, it makes it very, very clear that the Government supports road projects that are about how we join up cities in our country.”

He did, however, say that Fine Gael would prefer to see rail services between the two cities improved.

Later on RTÉ Radio’s Today with Sarah McInerney show, when asked about Mr Donohoe’s comments on the M20, Ms Martin said: “if there’s commitments there and investment has gone in then those roads will go ahead, but we have got the commitment to €350m — 10 per cent in cycling and walking and the 2:1 public transport now over roads, that’s where we need to be.”

Mr Donohoe said that if “this particular coalition” was formed there would be three different parties with differing views on important issues.

The €4 billion to €6 billion that the carbon tax was expected to generate over the next five years would be used for capital projects that reduce emissions. “We are prioritising the use of that money for things that can help us get to the target of seven per cent,” he added.

The Green Party has insisted it wants a seven per cent annual average reduction in greenhouse gas emissions.