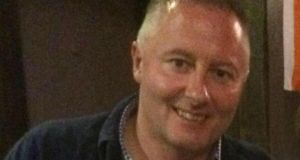 Det Gda Colm Horkan was 49-years-old and 24-year veteran of the force.

Murdered Det Gda Colm Horkan was set to be taken the final journey home to Charlestown, Co Mayo, on Friday afternoon after his remains were released to his family as local people gathered at the shooting scene where bullet holes in walls were evidence of how the victim had been killed.

The 49-year-old single man and 24-year veteran on the force was shot dead by a man with apparent mental health issues in Castlerea, Co Roscommon, late on Wednesday night.

As the 44-year-old from Castlerea was still being questioned in Castlerea on Friday, the murdered detective’s remains were due to be brought back to Charlestown ahead of his funeral on Sunday.

His remains were due to be escorted by his Garda colleagues across the west back to the Horkan family home in Charlestown.

The large cortege was expected to stop at Ballaghaderreen Garda station where Det Garda Horkan had been based until recently being posted to Castlerea after being promoted to detective.

Garda colleagues and local people were expected to turn out in numbers at Ballaghaderreen station when his remains are taken for a period of reflection and to honour him.

The scene of Wednesday night’s shooting in Castlerea remained sealed off until 3.30pm on Friday when the town was re-opened.

At the scene of the killing, a T-junction of Main St and St Patrick St, the signs of gunfire were clear to see, with one bullet hole on the exterior wall of Mulligan’s Menswear, another bullet hole in a window, patched up with cardboard and brown tape, of Gannon Travel across the road and another bullet hole visible in a steel gate beside Adrian Boyle Dental Surgery.

John Mulligan, the owner of Mulligan’s Menswear at the junction told The Irish Times of his “absolute shock” that Det Gda Horkan had been shot dead right outside his business and that the exterior wall, right beside the front door to the premises, had been fired at.

“My dad started this business back in 1968 and this is an awful shock; horrendous. Nobody could believe what had happened. We’re a small quiet, rural town and to have something like this go on . . .”

“At the start, word went out on the night that, on Wednesday night when it happened, that there were shots down town and then 10 minutes later we heard somebody was injured from the shots. Then there was speculation it was some guy buying drugs off a dealer or something and got shot or that some dealer had arrived in town and it was really only the next morning that we heard that a Garda was shot.

BALLAGHADEREEN - THE TOWN HE SERVED SO WELL: Garda colleagues of Colm Horkan were out in force this afternoon to pay respects to their local hero as he made his final journey through the town. Son. Brother. Friend. Garda. #Beloved #RIP pic.twitter.com/zPvHFOeySD

“And then you realise its a man who had been working in the town almost 20 years, and that it was outside out front door; that a guard was shot and there’s a bullet hole on our front wall . . . it’s just terrible. God, when you think if it, a man went out to work and he never went home. We know all the gardaí, they are all good guys. Colm was a quiet guy, I ran into him on a couple of occasions for different things, a real nice guy. The whole thing is just so sad.”

Garda sources said the 44-year-old suspect, who is from Castlerea and had recently spent time in the UK, somehow secured Det Gda Horkan’s pistol from him and discharged 15 shots from it, many of the bullets being fire into nearby buildings and a number of shots hitting the victim and killing him at the scene.

Books of condolence have been opened around the country following the shooting dead of Det Gda Horkan on Wednesday night.

Lord Mayor of Dublin, Tom Brabazon and the Mayor of Cork County Ian Doyle have expressed their condolences to the family and colleagues of Detective Garda Horkan.

Books of condolences have also been opened at Garda stations across the State.

Hundreds of people attended a vigil in Castlerea on Thursday night. Garda colleagues joined community leaders for prayers to remember the deceased officer.

Supt Goretti Sheridan of Castlerea Garda Station thanked the local community for standing in support of the local members of the force .

Speaking at the prayer service , Supt Sheridan told the crowd, who had gathered at the town’s Fairgreen while observing social distancing, that “it means a lot to us here in Castlerea and in the station in Ballaghaderreen”.

“We are devastated at the death of our friend and colleague Colm”, she said.

She thanked local Parish Priest Fr John McManus for attending the scene of the shooting on Wednesday night . “He said a few prayers and that meant the world to us,” added Supt Sheridan.

Fr McManus, who led the prayer service, said the community had gathered in prayer and in memory of Garda Horkan. He added that this was a testing and painful time for the family of Garda Horkan and for all who knew and loved him.

As the bell of St Patrick’s Church rang through the town a minute’s silence was observed for the Charlestown, Co Mayo native and candles were lit in his memory.

Speaking in Castlerea on Thursday Garda Commissioner Drew Harris described Det Garda Horkan as “a beloved member of the community”. He said he was deeply saddened by the killing which was “a random act”.

Expressions of sympathy have also been made by the Taoiseach Leo Varadkar and President Michael D Higgins.

Speaking in Dublin as he opened the online book of condolence Mr Brabazon said he was “deeply saddened” by the death.

“Detective Garda Horkan was a dedicated public servant who had also worked as a retained fire fighter in Charlestown, Co Mayo. I am opening this book of condolence to allow the citizens of Dublin to express their sympathies to the family and colleagues of Detective Garda Horkan. Ar dheis Dé go raibh a anam,” he said.

In Cork Mayor Doyle said he was “shocked and saddened” to hear of the death of Detective Garda Colm Horkan while on duty”. This is “tragic loss for his family, friends, An Garda Síochána and the community he served during these most difficult times.”

The funeral details for Det Garda Horkan have been finalised. He will lie in repose at the family funeral home in Charlestown on Saturday afternoon. His remains will then be removed from the family home on Sunday morning to arrive at St James’s Church, Charlestown for concelebrated funeral Mass at 12 noon, followed by burial in the adjoining cemetery.

The funeral mass will be broadcast live on mcnmedia.tv/camera/charlestown and Midwest Radio. The family have asked people to adhere to current HSE guidelines and restrictions at all times.