Greens wary over lack of detail in ‘vague’ programme for government 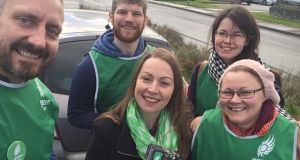 Julie O’Donoghue has spent much of the week reading and rereading the programme for government document negotiated by some of her Green Party colleagues.

She could see how much work went into it, but the more she read, the more she found herself concerned by the vagueness of the language. “There are some good elements in it, but I would see shortcomings,” she said.

“The language is quite vague and lacking specifics,” she told The Irish Times, noting especially that the carbon tax proposals leans heavily towards Fianna Fáil/Fine Gael ideology.

The Greens’ policies in that are “progressive”, argues O’Donoghue, favouring that revenue collected from carbon taxes would be returned to people to encourage behaviour change.

“That, to me, is weak. Mercosur would be disastrous for the environment and for rural communities,” said O’Donoghue, a secondary school teacher who ran for the Greens in the February general election.

Eliminated on the third count, O’Donoghue now says her instinct is that it will take a lot of persuasion in order to get two-thirds of the party membership to endorse the coalition programme.

“I would like to hear from our three TDs who have abstained – our finance spokesperson has abstained, and that has caused huge concern for me with the fear of austerity post-Covid.

“We need reassurances that people aren’t going to be hurt by this. I believe I will vote no, to be honest. But I will make a final decision after the convention on Thursday.”

Rosin Garvey became the first female Green elected to Clare County Council on the back of the rural stronghold of north Clare. “Farmers got me elected,” she says unequivocally.

Noting Saoirse McHugh’s warning that the programme is filled with “woolly, almost management speak”, Garvey nevertheless says the Greens have an obligation to support the programme and will.

“I trust our membership. There is a climate emergency. If we don’t vote for this we could be waiting another five years. We either think there is an emergency or there isn’t.

“If we believe that we have to support this programme, and fight all we can to get everything done we need to do. What is the alternative? Go back to the ballot box and get crucified?”

The Greens can win over sceptics amongst farmers and rural dwellers, says Garvey, whose father, Flan served as a former Fianna Fáil councillor for over 20 years.

“I think farmers have been given a raw deal. Eighteen cents for a litre of milk? I go in and pay €1.10 for that same litre? There is something radically wrong with that.

She warns that global climate-change fines will cost Ireland a fortune. “I have done the numbers. If I thought it would cripple rural Ireland I would object to it. The Greens are a social justice party and actually support farmers.”

She says the possibilities of coalition outweigh the disadvantages. “We all have reservations. Propping up FG and FF was never our ambition. But we are in the middle of a pandemic.”

Voters want a government formed, she says. “If we turn around now and say ‘sorry, we are not happy with this’, then we are a laughing stock. We will be completely destroyed.”