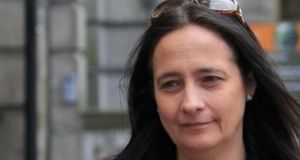 Green Party deputy leader Catherine Martin has said that when the Taoiseach changes there will be an opportunity to renegotiate the terms of the programme for government. Photograph: Gareth Chaney

Green Party deputy leader Catherine Martin has said that when the Taoiseach changes there will be an opportunity to renegotiate the terms of the programme for government.

In the meantime the Green Party will conduct internal analysis every two to three months to monitor how policies are being implemented, she told RTÉ radio’s Today with Sarah McInerney show.

Ms Martin also reiterated her concern that there are a number of Independent TDs who “have a different ethos” and are in conflict with the Green Party’s principles. No one should have preferential access to Ministers, she said.

If a single TD seeks information they should have equal access to members of the Cabinet, she added.

Ms Martin refused to discuss leadership of the Green Party, she said that was a matter for after a decision was made on the Programme for Government.

The Dublin-Rathdown representative defended her decision to support the document, she said she believed it was better to be within government where there was the potential to make change. “The country needs stability. There is great uncertainty for us as a nation and as a planet.”

The Green Party will continue to “fight hard” and she said they would continue to bring the fight to government, to continue to challenge at all times.

Ms Martin talked about her husband Francis Noel Duffy’s different position, she joked it was “interesting times in our house”, but that it was all part of healthy debate. “We agreed to disagree”.

It was presumptuous to think that two TDs in same party would think the same way just because they were married, she added. Their discussions were vibrant, she said. They were united as a family and would act in the best interests of the party.

No matter what the result of the party’s vote on going into government, everyone would respect the result, she said.

“We will go into this government with eyes wide open, if we go into government.”

She said there will be internal analysis within the party every two to three months to see if policies are being implemented.

If the Green Party was going to go into government it was with the aim of making a substantial change, “there’s no point otherwise.”

Ms Martin urged party members to read the programme for government carefully, to take the time to go through the details, but ultimately members must do what they thought was best for the party and the country.