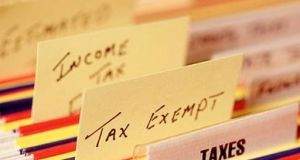 Fianna Fáil, Fine Gael and the Green Party have agreed that carbon tax will rise to €100 per tonne by 2030. Photograph: Getty Images

There will be no increases in income tax or USC rates under a proposed government of Fianna Fáil, Fine Gael and the Green Party, according to the finalised programme for government.

The document pledges that there will be no changes to income tax credits or bands in the next budget, and that from Budget 2022 onward credits and bands will be index-linked to earnings if the economy recovers.

The 3 per cent USC surcharge applied to self-employed income is “unfair”, and proposals will be considered to change this, the document says.

The home carer tax credit will also be increased to help stay-at-home parents.

Other taxation measures will be used to close the deficit which will involve targeting tax behaviours with “negative externalities” such as carbon tax, sugar tax and plastics.

The three parties have also pledged to examine, in advance of Budget 2022, appropriate funding measures to support the implementation of Sláintecare.

On public pay the parties say they will seek to negotiate a new pay deal with the public service unions.

“Our approach to those negotiations will be guided by the State’s financial position and outlook, challenges in relation to recruitment and retention, and conditions within the broader labour market.”

A new commission on welfare and taxation will also be established.

The document also addresses local property tax (LPT) , and the parties have pledged to bring forward legislation to ensure that most homeowners will face no increase.

“We will also bring new homes, which are currently exempt from the LPT, into the taxation system.”

Another key plank of the plan for economy is a “July Jobs” initiative. Then in October, the new government will set out a longer-term national economic plan.

“In a few short months Ireland has gone from a position of record employment to record unemployment, and faces an unprecedented challenge in terms of getting people back into employment. Never before has any government faced such a challenge, and we will not be found wanting in our response.”

The new government is aiming to create 200,000 new jobs by 2025, as well as helping people currently unemployed due to Covid-19 to get back to work.

The parties also say they will agree the future path for both the temporary wage subsidy scheme and the weekly pandemic unemployment payment.

There will also be a “high-level review of the Irish economy”, which will be led by the Department of the Taoiseach.