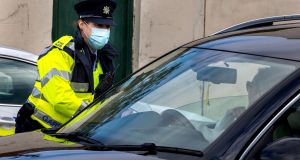 A garda at a checkpoint. By the end of 2021 the Garda force is set to expand to 15,000 sworn members. Photograph: Liam McBurney/PA Wire

The prospect of another recruitment moratorium in the Garda, which had been feared by many in the force, has dissipated after funding was confirmed in the budget for the recruitment of 600 new recruits next year.

Those recruitment plans mean the Garda force, which is now bigger than at any time in the history of the State at just over 14,600 sworn members, will increase further. By the end of 2021 it is set to expand to 15,000 sworn members when retirements over the next year are factored in. Furthermore, around 500 new civilian workers will also be recruited next year.

Those recruitment plans were among a wide range of measures set out in Budget 2021 based on a €3 billion budget for justice in 2021, some €200 million higher than that unveiled last year.

Minister for Justice Helen McEntee said recruiting more Garda civilian workers would ensure hundreds of gardaí could be freed from administrative jobs and deployed back to frontline policing.

“More Garda recruits and more Garda staff means extra members of the service on the frontline and in specialist units battling organised crime groups and keeping people safe,” she said.

A total of €27 million has been made available across the justice system for Covid-19 related measures, which includes €13 million for PPE for the Garda.

Some €5.7 million has been provided for increased PPE, cleaning and healthcare costs for the Irish Prison Service.

A further €5.7 million has been allocated to the Courts Service to address the challenges posed by Covid-19, including enabling the holding of court sittings in new buildings for the duration of the pandemic in a bid to prevent delays in the system.

The Criminal Assets Bureau, which has expanded its efforts in recent years to target smaller gangs, has seen its budget increased by €900,000 to €9.96 million, while the €13 million for the Coroner Service includes provision for an inquest into the deaths of those who died in the Stardust fire in Artane, Dublin, in 1981.

During the course of the pandemic, particularly the period of strict lockdown in spring, an increase of almost 25 per cent in the number of domestic violence and domestic abuse incidents were recorded by the Garda.

As a result an additional €400,000 has been made available for organisations that provide assistance and advice to victims, including counselling and help lines.

Forensic Science Ireland, which provides the forensic expertise and resources required for the investigation of crime, has secured an extra €10 million for capital spending, bringing that budget to €51 million as the service’s modern new laboratory is being constructed in Backweston, Co Kildare.

Meanwhile, Minister for Foreign Affairs Simon Coveney, who also holds the defence portfolio, has welcomed the increase of €32 million in defence funding in the budget bringing it to €1.07 billion.

Amid sustained criticism for many years at the reduction in strength of the Defence Forces, Mr Coveney said the Government was committed to increasing to 9,500 the number of personnel in the forces.

He believed numbers would increase under the budget allocation for next year.