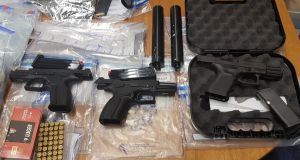 Gardaí have made a very significant seizure from an organised crime gang with drugs valued at almost €1 million seized, close to €500,000 in cash confiscated and three firearms also found.

Silencers and ammunition for the guns were also part of the haul, which included a Glock 9mm semi-automatic handgun, two Walter 9mm handguns, two silencers and 75 rounds of 9mm Luger and Fiocci ammunition.

While news of the operation by the Garda National Drugs and Organised Crime Bureau emerged on Wednesday, it took place on Tuesday morning in Co Meath.

One man was arrested, and he remains in custody, after searches were carried out at a business premises in Rathfeigh, Co Meath, at around 11am.

The haul of drugs was comprised of MDMA, or ecstasy, tablets valued at around €570,000 along with €156,000 of suspected MDMA powder, from which tablets are made.

Members of the Garda National Drugs and Organised Crime Bureau were supported during the intelligence-led operation by gardaí attached to the Meath Divisional Drugs Unit, the Eastern Region Armed Support Unit, the Customs Unit and the Garda Dog Unit and gardaí from Ashbourne, Co Meath.

The man arrested is in his early 40s and was being questioned on Wednesday at Ashbourne Garda station under Section 2 of the Criminal Justice (Drug Trafficking) Act.