Covid-19: Assault trial to be heard in Croke Park in January 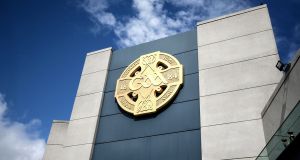 A criminal trial is to take place in Dublin’s Croke Park stadium next year to comply with Covid-19 social distancing regulations.

It has been decided that trials with large numbers of defendants cannot take place in the Criminal Courts of Justice (CCJ) as the number of people required in the courtroom would exceed HSE guidelines.

The Courts Service is examining multiple alternative venues for such cases and Croke Park, the GAA’s headquarters and Ireland’s largest stadium, has been approached about the use of its conference facilities.

The service is yet to sign a formal contract with the venue but the first trial to take place in the stadium was set down on Friday by Judge Patricia Ryan.

On January 25th next, eight men will go on trial in the stadium. They face 16 charges of assault and violent disorder relating to an alleged incident on February 7th, 2015 in Hartstown, Dublin 15.

It is estimated that between lawyers, defendants, jurors and court staff the courtroom will have to accommodate up to 50 people at any one time.

“There’s just no way the CCJ could handle that number safely,” a legal source said.

It is understood the trial will take in one of the stadium’s conference facilities.

“We’re already having great fun with it, slagging the Mayo guys that it’s the only time they’ll see Croke Park next year,” a criminal defence solicitor said on Friday.

Croke Park has conference facilities which, in normal times, can accommodate up to 750 people. Parts of the stadium are already being used by the State as Covid-19 testing facilities. It is not yet clear if the contract will be on a trial by trial basis or if a longer term agreement will be entered into.

The Courts Service’s existing facilities have so far been able to accommodate jury trials since they resumed in July, having been suspended in March after Covid-19 began spreading in Ireland.

However, it has had to rent additional venues outside Dublin to allow juries to be selected from panels, which can be up to 300 strong. These venues have included conference facilities and, in one case, a leisure centre.

The courts have at times struggled to maintain social distancing in its venues, especially near the start of the pandemic. A limit on the numbers allowed in court has at times resulted in large groups of people crowding outside courtrooms waiting for their cases to be called. The situation has since improved considerably with better scheduling of cases.

In criminal trials, juries now do not sit in the jury box but are spread out around the courtroom, further limiting the numbers permitted to attend. This week Chief Justice Frank Clarke and the presidents of the other court divisions issued a statement “strongly recommending” the use of facemasks in court.

“Proper and effective use of available microphones should overcome any difficulty in those addressing the court being heard,” the statement said.

However, unlike in other public buildings, masks are not mandatory and witnesses can ignore the recommendation if a judge rules that wearing a facemask would be prejudicial. Some lawyers have privately worried that juries might find it more difficult to assess the evidence of a witness wearing a facemask.