Taoiseach ‘has a hard job trying to please everyone’, says Cork pensioner 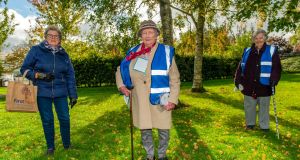 All politics is local, especially in Cork. Taoiseach Micheál Martin’s neighbours watched him as he grew up in Turner’s Cross on the city’s southside. Viewing Budget 2021 on Tuesday, many of them gave him the benefit of the doubt.

Recalling that he was in her son Diarmuid’s class at Coláiste Chríost Rí, Eileen O’Neill from Capwell Road in Turner’s Cross was generous in her praise of Mr Martin and his Government.

“He has a hard job trying to please everyone. There’s no change in the old age pension but they could have gone a bit further with the fuel allowance – €2 a week isn’t a lot and when you are our age, heating is very important.

“Social housing – I would like to see something done for the people sleeping on the streets, it’s very sad. There’s a lot of depression out there and a stepping stone into a house would help a lot of these people,” said Eileen.

Eileen, and her fellow member of the Turners Cross Active Retirement, Lillian Hamill from Green Lawn, welcomed the €5 increase in the Living Alone Allowance, as the group met for a walk in Tory Top Park.

The extra €5 for the Living Alone Allowance was welcome, said Bernice Quirke from Kinsale Road, but “I thought he might have given us a fiver” on the Old Age Pension.

Capwell Road residents Joan Carey and Gaye O’Leary, who both knew Mr Martin’s late mother, Lana, agreed about the lack of a pension increase, but still thought the budget “was okay in all the circumstances, given Covid-19”.

Father of three young children, Pat Crowley, an accountant currently working from home on O’Connell Crescent due to Covid-19, saw few surprises in the budget.

“They’ve committed €500 million to build 9,500 social housing units which is good news and they’re keeping the Help to Buy scheme; it would have been good if they put a tax on development land to try to push up the supply.

Angela Hayes, who runs Alpha Hair Studio on Evergreen Road, was busy taking telephone bookings but welcomed the news from Government that it is going to provide up to €5,000 a week to businesses affected by Covid-19.

“I presume that payment is more designed for bars and restaurants and I’m hopeful we will be left open if we move to Level 4 but it is something I would welcome in the event of us having to close again; it would be a help.”

Gerard Murphy from South Douglas Road, who turns 90 on Friday and who once played as a guest player on a CIÉ football team with the Taoiseach’s late father, Paddy, was phlegmatic about the budget.

“To be fair, I think they’ve made a reasonable hand of it. I mean it is historic with Fianna Fáil and Fine Gael together. I can go back to the 1930s and I remember the aggro. I never thought I’d see them in coalition together.”

1 Shops, hairdressers and hotels expected to reopen next week as Level 5 restrictions are eased
2 Almost 15% of Irish adults have been raped, study finds
3 Eir to issue apology for poor customer relations service
4 Miriam Lord: Unity and common purpose in spades but not for Covid fight
5 Covid-19 response: Has Level 5 been worth the cost?
Real news has value SUBSCRIBE