Cannabis worth €700,000 seized in Cork and Donegal 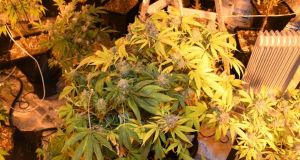 Gardaí discovered a grow house during a search operation in Co Donegal on Friday morning. Photograph: An Garda Síochána

Gardaí have seized an estimated €700,000 worth of cannabis in two separate operations in Co Donegal and Co Cork.

Cannabis plants worth an estimated €400,000 were discovered during a search at a premises in Drumrooske, Co Donegal, which began at about 9.45am on Friday.

During the search a grow house was located and between 450 and 500 cannabis plants – pending analysis – were discovered. The plants were at varying stages of growth, according to gardaí.

Gardaí say the search was carried out under Section 26 of the Misuse of Drugs Act as part of an ongoing operation in the Donegal Town area.

In a separate operation on Friday carried out at various locations in the Bantry area, Co Cork, gardaí seized a large quantity of cannabis herb valued at about €300,000.

The search was carried out as part of an ongoing Garda operation targeting the sale and supply of drugs in the Bantry area.

No arrests have been made in connection with either seizure and investigations are ongoing.

1 Taoiseach claims Sinn Féin not ‘a normal political party’
2 Over 65s are expected to ‘crawl into corner and die’, says election hopeful Valerie Cox
3 Yacht captain guilty of drunk sailing had ‘God given right’ to be on Liffey
4 Man shot at in taxi claims bail conditions made him ‘sitting duck’
5 Man who killed Jastine Valdez shrugged before being shot by gardaí, inquest told
Real news has value SUBSCRIBE