Parking fines could be abolished under proposed major overhaul 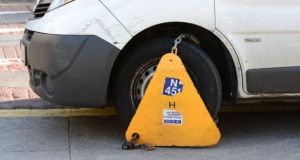 Fines for illegal parking would be abolished in favour of nationwide clamping under new proposals by the Courts Service. Photograph: Alan Betson/The Irish Times.

The non-payment of TV licences would be tackled by adding a “fine”, or top-up, to a person’s local property tax, and fines for illegal parking would be abolished in favour of nationwide clamping under new proposals by the Courts Service.

Drivers with unpaid fines for motoring offences would also be prevented from retaxing their vehicles or selling them until they paid.

Under the proposals, fines imposed for motoring and other crimes could also be collected in the way civil debts are – sheriffs entering homes, by force if necessary, and seizing property to sell to satisfy a debt, as is the case with overdue taxes.

The Courts Service said the Fines (Payment and Recovery) Act was not working as intended and believed the logic the legislation was based on, keeping fine defaulters out of prison, was flawed all along.

“In practice, hardly anyone was admitted to prison because of overcrowding and for some their arrest was seen as a way of clearing their fines debt,” Courts Service chief executive Angela Denning said of the system before the Act began operating exactly three years ago.

In correspondence to the Public Accounts Committee (PAC), Ms Denning said the Courts Service had requested a meeting with a Department of Justice group reviewing the Fines Act.

In reply to queries, the Department of Justice told The Irish Times a meeting of the group was scheduled for mid-January.

“The group is looking at how to maximise the effectiveness of the legislation and its implementation which includes issues such as those raised by the Courts Service,” the department said.

The Courts Service is a member of the review group, which also includes representatives of the Office of the Attorney General, An Garda Síochána, the Office of the Director of Public Prosecutions, the Irish Prison Service and the Probation Service.

The Courts Service believes once a judge imposes a fine in court as punishment for a crime the courts should have no further involvement and their responsibility to collect the fine would be abolished.

In her correspondence with the committee, Ms Denning also said the streamlining of court fines payments intended by the Fines Act had not come about. Fewer people were now paying on time, fewer fines were being collected and more suspects were not turning up to court, she said.

“People now know they won’t go to prison any more if they don’t pay fines and so they’re not paying or they’re delaying or not turning up to court,” said one source.

In 2014, €11 million in fines was collected by the courts, falling to €7 million by 2018. The drop occurred during years when the number of fines issued by the courts did not decline.

An instalment system, to make it easier for people to pay court fines, created by the Act was being taken up by only 1.5 per cent of people within the time frame permitted. Only 26 per cent of fines are now being paid by the due date.

The Irish Courts Service declined to make any further comment when contacted by The Irish Times, saying its position was clearly set out in the documents sent to the committee.