Teenager ‘may lose finger’ after stabbing during brawl in Artane

Up to 20 youths involved in fight in north Dublin suburb, leaving male (18) with severe injuries to hand 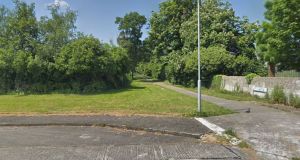 The teenager was stabbed in a laneway connecting Thorndale Estate and St David’s Sports Grounds in Artane. Photograph: Google Maps

A teenager faces losing a finger following a mass brawl in north Dublin involving up to 20 youths.

The 18-year-old male was stabbed a number of times during the incident in Artane in Dublin 5 which occurred between 8pm and 9pm on Thursday.

The teenager was stabbed in a laneway connecting Thorndale Estate and St David’s Sports Grounds.

“This young male’s injuries are serious and life changing but not life threatening,” a Garda spokesman said as the force appealed for witnesses to the incident.

No arrests have been made yet in connection with the incident and the investigation is ongoing.

Garda sources said the teenager suffered severe injuries to his hand and may lose a finger.

Gardaí do not believe he suffered his injuries in a pre-arranged fight. Instead it is suspected that two rival groups of youths came across each other and a row broke out over which one had the right to be in the area.

“It was some sort of dispute over turf,” said a source. It is believed only one of the youths was armed with a weapon.

Following the stabbing both groups immediately fled in the direction of Rockfield Park.

Gardaí from Clontarf are seeking to speak to anyone who has information about the incident or anyone who may have witnessed or heard any disturbances in this area around the time.

“We wish to appeal to road-users with camera footage, or anyone who may have video footage of the incident from social media sources to come forward,” a Garda spokesman said. “Members of the public are urged to contact Clontarf Garda station on 01-6664800 or the Garda Confidential line on 180066611.”