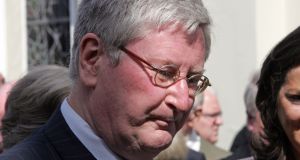 Mr Justice John McMenamin: will march in full robes with Polish and European colleagues at the protest against curbs on the Polish legal system. Photograph: Eric Luke

An Irish Supreme Court judge is to participate in a protest march in support of Polish colleagues who say their independence is being systematically eroded by the country’s government.

The participation of Supreme Court judge Mr Justice John MacMenamin, who will represent the Association of Judges of Ireland (AJI) in the “silent march” in Warsaw this Saturday, will be the first time the association has participated in a public protest either in Ireland or abroad.

It reflects a deep concern felt by the AJI over a series of measures introduced by Poland’s ruling Law and Justice party (PiS) granting the government greater control over the selection and discipline of the judiciary. Although the body does not formally represent the judiciary, the vast majority of Irish judges are members. .

Mr Justice MacMenamin will march in full robes along with Polish and European colleagues. He will carry with him letters of support from Chief Justice Frank Clarke and the AJI.

The decision provoked an incredulous response from Polish pro-government media, some of which focused on Ms Justice Donnelly’s own background and sexual orientation

It is understood Mr Justice Clarke’s letter is likely to express concern over legislation currently before the Polish parliament which would make it easier to dismiss judges critical of the government’s judicial policies. It will also outline concerns previously expressed by the AJI over the reforms.

The Irish judiciary were among the first judicial bodies in Europe to agree to take part in the protest which is described by organisers as “apolitical”.

Both the AJI and individual judges have been vocal critics of the judicial policies of the Polish authorities in recent years, a stance which has aggravated government supporters in that country.

In 2018, High Court judge Ms Justice Aileen Donnelly delayed the extradition to Poland of an alleged drug trafficker over concerns about rule of law in the country.

The decision provoked an incredulous response from Polish pro-government media, some of which focused on Ms Justice Donnelly’s own background and sexual orientation.

The AJI responded by strongly condemning “the personalised attacks and invective” directed at the judge.

Saturday’s protest is being organised by Justitia, the representative body for Polish judges. In a statement, it called on European judges to “show your disagreement with the destruction of the rule of law rule fundamental for all European countries.

“Support our protest against the attacks on the fundamental right of every citizen: the right to an independent and fair court deciding cases in accordance with the law understood as a harmonious system of European and national law.”

A spokeswoman for Justitia said judges from France, Italy, Portugal, Belgium, Croatia, Spain, Greece, Germany, Holland, Norway, Denmark, Romania and Hungary will also be in attendance as well as a judge who fled repression in Turkey.

Justitia said Poland’s judges have not faced such challenges since the fall of communism in the country in 1989.

Since coming to power in 2015, the right-wing, populist Law and Justice Party has drawn international criticism for its overhaul of the country’s judiciary.

Under its measures, judges can now be subjected to disciplinary proceedings and sanctioned if authorities deem their rulings inappropriate. The disciplinary body, the National Council of the Judiciary (KRS), is mostly composed of members appointed by the parliament.

Judges have to date been issued with disciplinary charges for alleged infractions such as taking sick leave and speaking to foreign journalists.

The participation of Irish judges in the protest is “unprecedented”, said barrister Tony McGillicuddy.

“I can’t think of an Irish judicial figure ever participating in a march or protest before. I think they would likely not want it to be seen as a overtly political statement but one of solidarity with fellow judges.”