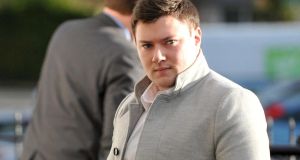 Mr Healy-Rae told Mr Harris, he wished to raise Garda leaks to the press ‘when it comes to different cases investigated by the gardaí’. Photograph: Don MacMonagle

The appropriateness of a councillor, with a recent conviction for assault, sitting on a Joint Policing Committee (JPC) in Kerry was not a matter for him, Garda Commissioner Drew Harris has said.

Addressing a question about Cllr Jackie Healy-Rae, who sits on the JPC at a meeting of the committee in Tralee on Friday, Mr Harris said the appointment was a matter for the committee itself.

Cllr Jackie Healy-Rae, 24, son of Independent TD Michael Healy-Rae was one of three men convicted late last year of assault causing harm to 30-year-old Englishman Kieran James in Kenmare, Co Kerry, on December 28th, 2017 in a dispute which arose near a chip van.

He was elected to Kerry County Council in May 2019 and was appointed, unopposed, by his fellow councillors to the Kerry JPC at the council annual general meeting in June.

At the JPC meeting on Friday, Mr Healy-Rae told Mr Harris, he wished to raise Garda leaks to the press “when it comes to different cases investigated by the gardaí”.

The councillor asked how it was that when a person made an arrangement by appointment to be interviewed, it could be that the very next day that would be on the front page of a national newspaper.

He also asked how at each and every turn of an investigation members of the media – some of whom were present – could ring someone up and tell them when they were due to be in court – “when the person doesn’t know themselves”. The leaks were not necessarily from the Kerry Division, he said.

Mr Harris said it was not appropriate for gardaí to leak information and it was a breach of discipline and in some cases of Data Protection legislation. Gardaí who did so, were putting their own careers and livelihoods in jeopardy, he said.

Also at the meeting, Mr Harris said he had confidence in the commitment and quality of Kerry gardaí. He also said nothing less than the enforcement of all law, including licensing law, was acceptable.

He was reacting to concerns about alleged long-standing Garda failure to implement the licensing laws in tourist town Killarney.

Among the allegations to emerge in recent days were that as many as 30 premises had no licences and operated as “shebeens” in 2012.

The Garda Síochána Ombudsman Commission, independent of the Gardaí, had been mandated to carry out an investigation, Mr Harris said.

“If people have information, they should take that to GSoc,” he said.

“They are mandated in law to conduct this investigation and in time we will learn their conclusions.”

A “previous” investigation, in 2016, on foot of a separate internal Garda complaint– known locally as vouchergate — into whether gardaí were being offered vouchers by a publican, was also referred to GSoc, and the commissioner said he would check the status of that and enquire if it could be revisited.

Referring to the allegation that 30 of the town’s 130 premises did not have licences in 2012 Senator Paul Coghlan (FG)and said this meant they were operating as “shebeens”. Some premises in Killarney could serve into the early hours, he also said.

“This is something reminiscent of the Wild West.”

The most important thing is that we have an assurance that whatever happened in the past standards were upheld and the law is operated without fear or favour, he said.

Mr Harris said having met with Kerry gardaí during his visit, he could give the reassurance and he added he had confidence in the quality and calibre of Kerry gardaí and in their commitment to law enforcement.