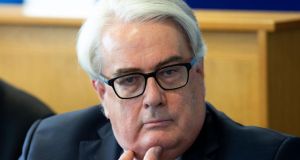 Chief Justice Frank Clarke said in his letter that ‘certain measures of recent Polish legislation have failed to fulfil the fundamental obligation to respect the independence of the Judiciary.’ Photograph: Tom Honan

Judges must be “brave” in protecting their independence, Chief Justice Frank Clarke is to tell Polish colleagues protesting against increasing Government encroachment.

Irish Supreme Court judge Mr Justice John MacMenamin will deliver messages from Chief Justice Clarke and the Association of Judges in Ireland (AJI) to their Polish counterparts when he attends a protest march in Warsaw on Saturday.

Mr Justice MacMenamin will march with dozens of Polish and European judges wearing full judicial robes in a silent protest against a series of reforms introduced by Poland’s ruling Law and Justice party (PiS) granting the government greater control over the selection and discipline of the judiciary.

The AJI was the first judicial organisation in Europe to agree to take part in the demonstration with associations from nearly every other European country soon following suit.

The majority of Irish judges support participation in the march, including the presidents of the various court divisions. The Irish Times understands a small number of individual judges have privately voiced concerns at taking part in a protest against the policy of a government for fear participation could be interpreted as “political.”

However another judicial source pointed out that the AJI has previously criticised government policy when it concerns the judiciary. It has spoken out against the jailing of hundreds of judges in Turkey following the 2016 attempted coup and voiced its concerns over the appointment process for judges in Hungary.

Domestically, the AJI and its members have also criticised Irish government policy in the areas of judicial pay and the Judicial Appointments Bill.

Chief Justice Clarke will not attend Saturday’s protest personally due to a previous commitment to attend a ceremony in Paris to open the legal year.

In his letter to Iustitia, the Polish judges’ association, he states judges “must refrain from activity which crosses the boundary into the area of politics. We must be careful ourselves to respect the separation of powers.”

But he added judges must also “be brave to protect the rule of law and the independence of the judiciary which supports it”.

The issue of Polish judicial independence concerns judges from all EU countries as the nature of the Union they may have to rule on issues concerning EU law, he said.

The EU Court of Justice has already decided that “certain measures of recent Polish legislation have failed to fulfil the fundamental obligation to respect the independence of the Judiciary,” the Chief Justice states.

Chief Justice Clarke states in his letter it is necessary “for all of us to the support the rule of law in Poland. We today stand in solidarity with you.”

Amnesty International has also welcomed Saturday’s protest against the measures which it said “would bring the remaining free elements of the Polish courts under the political control of the executive branch, spelling the end of the separation of powers in Poland.”

“This unprecedented display of solidarity with Polish judges is a response to the growing severity of the crisis facing the country’s judiciary,” Draginja Nadaždin, Director of Amnesty International Poland, said.