Man in his 40s dies after attack in Co Waterford house

Man in his 20s arrested following incident in Portlaw 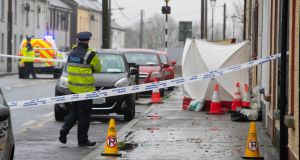 A man in his 20s has been arrested following a fatal assault in Waterford on Saturday morning.

Gardaí and emergency services attended the scene of a serious assault in the Portlaw area of Waterford in the early hours. A 48-year-old man was taken to University Hospital Waterford where he was later pronounced dead.

The incident began when a row broke out between the deceased and a 21-year-old man – who was known to him – outside a pub in Portlaw at about 2am, sources said.

The row seemed to have ended and both parties went to a house in Brown Street but a second row broke out between the parties inside the house.

The older man suffered a serious injury to the head and local medics were called before he was rushed by ambulance to University Hospital Waterford.

Efforts to resuscitate the man at the hospital proved unsuccessful and he was pronounced dead just before 4am.

The scene will be examined by Garda technical experts on Saturday.

The arrested man is being held Tramore Garda Station for questioning about the assault. He is being held under Section 4 of the Criminal Justice Act, which allows gardaí detain suspects for 24 hours.

Gardaí have requested the services of the State Pathologist’s Office and a post mortem is expected to take place in Dublin on Saturday.