Zach Parker: The violent death of a ‘cardboard gangster’ 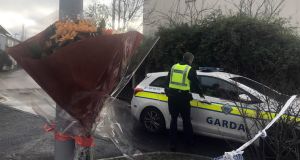 Flowers left at the scene in Swords where Zach Parker was shot and killed on Thursday night. Photograph: Aoife Moore/PA Wire

When Zach Parker’s name filtered through late on Thursday night as the man who had been shot dead in Swords, not many people had heard of him.

Detectives usually well versed in the Dublin’s gangland roll-call believed he was “not the kind of guy occupying the Garda national units”, as one put it.

And when the online news stories went up, followed by a second, more comprehensive take on his murder in Friday morning’s newspapers, it was clear Parker was a relative unknown.

Yet his body lay in the street outside a gym in north Co Dublin – the latest victim of the gangland machine that sucks in the naïve and often promptly spits them out: jailed, addicted or dead.

Parker (23), from Jugback Lane, Swords, had never been to prison. He drove a BMW SUV and holidayed in Dubai.

“He was very into his appearance – working out, tattoos, having a tan,” said one man who knew him.

“A few years ago loads of young lads got really into barbering and the style that went with it, and Zach threw himself into that,” he said. “People who knew him were aware he was caught with drugs a while back and that he appeared to have plenty of money. But I never thought for a second he’d end up dead.

“He’d strike you as a cardboard gangster. But he may well have been into this much deeper than people like me realised.”

A justice source familiar with his case – when he was caught with just under €3,000 worth of cocaine in Swords two years ago – described themselves as “absolutely stunned” on hearing Parker had been shot.

“He was affable, pleasant, mannerly. His family seemed very nice – not a story of disadvantage,” the source said. “He was caught with drugs but he never spent time in jail. And it seemed he had chipped in with other guys to buy the drugs but he was the one caught collecting it.”

A Garda source said Parker had been approved immediately as being suitable for community service, rather than be sent to prison.

“He was drug-free as recently as late last year, and he also seemed to get on well doing the community service,” the garda said. “But some of the guys new to drugs don’t appreciate how close they are to things going very badly wrong for them.

“It might make them a big man in the nightclubs, but do they understand they can get shot basically for nothing?”

The same source said a relatively small quantity of drugs bought on credit from a supplier but then seized by the Garda creates a debt to that supplier. And if a debt cannot be paid, the debtor may be killed to discourage others from defaulting. In the past young men had been shot dead over debts of hundreds of euro.

“If you go back 20 years or so, people were shot for what the criminal fraternity thought were legitimate reasons,” said one recently retired detective. “But then cocaine really landed in Ireland and very young fellas went straight into dealing it. And then it all got a lot more volatile.

“Some of them will shoot someone for a minor reason – maybe over small money and maybe because they never really liked them anyway.”

Over the past 3½ years, the Kinahan-Hutch feud has been the dominant event in the underworld in Dublin, with 19 murders to date.

But in reality, that feud has bucked the trend of a decade-long fall in overall gun crime in Ireland.

Garda sources say the drugs trade, of which gun crime is a key component, was decimated by the recession as recreational drug user incomes dried up.

And though the economy has recovered in recent years, gardaí believe the policing operation in place to combat the Kinahan-Hutch feud has curbed the illicit drugs trade, and related gun crime, across Dublin.