Solidarity rally being held on Monday evening in west Belfast 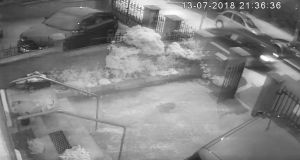 A video grab courtesy of An Phoblacht from CCTV footage of an attack on the home of former Sinn Féin president Gerry Adams. Photograph: PA 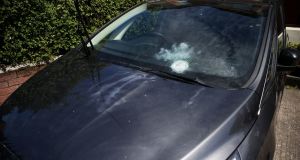 Damage done to a car at the scene of an explosive device attack on the west Belfast home of former Sinn Féin president Gerry Adams. Photograph: Brian Lawless/PA Wire

An explosive device thrown at the home of former Sinn Féin president Gerry Adams was hurled from a moving car, CCTV footage of the incident has revealed.

A short clip obtained by the Press Association and RTÉ on Sunday shows a car passing a driveway.

As it passes, sparks can be seen around a parked car in a driveway and then black smoke.

The home of prominent republican Bobby Storey in west Belfast was also attacked.

No-one was hurt in either of the incidents, which took place just after 9.30pm on Friday.

The CCTV footage has been shared with detectives from the Police Service of Northern Ireland (PSNI), who are investigating.

Significant damage was visible to a vehicle on Mr Adams’ driveway in the aftermath of the attack.

On Saturday, Mr Adams said he did not know who is responsible for the attacks, but thought there may be a connection with the recent disorder in Derry.

He challenged those behind the attacks to explain themselves.

“For those who were involved in the attack, if they have the gumption to sneak up on our homes, I’d like them or their representatives to come and meet me,” he said.

“I’d like them to sit down and explain to me what this is about.

He said he can be contacted through any Sinn Féin office, adding: “So that’s my direct appeal to them. Come and sit down and explain to me what this is about. Give us the rationale for this action.”

A solidarity rally is being held on Monday evening at the site of the former Andersonstown police station in west Belfast, for the families of Mr Adams and Mr Storey.

It is also being held for the people of Derry who last week endured six consecutive nights of disorder.

Sinn Féin president Mary Lou McDonald will be the main speaker at the rally which will also be attended by Mr Adams and Mr Storey.

“Those involved are opposed to the peace process and the process of change,” he said.

“Monday night’s rally is an opportunity for the people of Belfast to come out to show solidarity with the families of Gerry Adams and Bobby Storey and the people of the Bogside in Derry and send a message to those involved in attacks on republicans and on the community to stop immediately.”

Friday’s attacks in west Belfast came after six successive nights of dissident-orchestrated violence in the republican Bogside neighbourhood of Derry.