Trump meets Putin: Is this another ‘deal between dictators’?

Comment: Will the US president’s pattern of hostility toward allies and empathy toward autocrats continue? 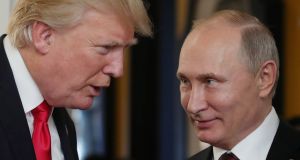 The forthcoming summit between US President Donald Trump and Russian President Vladimir Putin in Helsinki is making many in the transatlantic alliance nervous. Most fear a repeat of Trump’s narcissistic rogue diplomacy in June.

After a rancorous Group of Seven (G7) meeting in Canada, Trump travelled to Singapore where he had a much friendlier meeting with the dictator of North Korea, Kim Jung-un. Trump surprised the South Koreans by unilaterally cancelling joint military exercises, longstanding wargames designed to deter North Korea by projecting US-South Korean unity.

Trump’s resentment-fuelled diplomacy with allies was on display again at Nato’s annual summit this week, where he launched another blistering attack on Germany and scolded Nato members for taking advantage of the United States.

With Trump due to meet Putin in Helsinki on Monday, will the same strange pattern of hostility toward allies and empathy toward autocrats play out again? What if Trump tries to do a deal with Putin, offering meaningful concessions in exchange for his own narcissistic pleasure at having seemingly negotiated a diplomatic breakthrough?

There have long been indications that Trump wants to change US policy on Crimea. The annexation of the peninsula by Russia in March 2014 was the first territorial annexation in Europe since the second World War.

During the 2016 presidential campaign, candidate Trump was asked if he would recognise Crimea as Russian and lift sanctions on Moscow imposed after its annexation of the Ukrainian territory. Trump replied: “Yes. We would be looking at that.”

Trump later said Putin “isn’t going into Ukraine”. Challenged on this he explained: “But you know, the people of Crimea, from what I’ve heard, would rather be with Russia than where they were.”

Returning to the issue at a political rally in Ohio the next day he asked the crowd: “Do you want to have World War III to get [Crimea] back?”

Trump has been in office now for a year and a half. His personal views on Crimea appear unchanged. At a dinner during the recent G7 meeting Trump reportedly told other leaders that Crimea was Russian because everyone who lives there speaks Russian.

In late June he refused to rule out the possibility that he may drop US opposition to Russia’s annexation, telling reporters “We’re going to have to see.”

White House press secretary Sarah Sanders tried to quell the resultant speculations by re-stating that the US and Russia “agree to disagree” on Moscow’s annexation of Crimea. Trump’s disposition suggests he wants to change US policy to recognise Crimea as Russian territory, a shift that would put him at odds with the prevailing consensus on sanctioning Russia over Crimea within the transatlantic alliance (reiterated on Wednesday).

Why the rogue rhetoric?

It would also put him at odds with senior figures in his own administration. They have pushed the US toward greater involvement in Ukraine, approving the sale of high-tech weapons previously denied by Obama. Trump’s administration also boosted spending on Nato’s European Reassurance Initiative, and overall Nato defence spending has risen significantly.

After the recent UK nerve agent attack, the US expelled 60 Russian diplomats, an unprecedented number. Trump’s administration, by many measures, has been “tough” on Russia, as the president himself has boasted.

What then explains Trump’s rogue rhetoric on Crimea? There are three possibilities. The first is that Trump is really a pragmatic realist who looked at the Crimean annexation and concluded that Russia’s actions had some justification. Crimea was a province of the Russian empire and later part of Soviet Russia until 1954, when Khrushchev gave it as a “gift” to his native Soviet Ukraine.

The majority of the ethnically mixed population there identify as Russian, and the language of everyday life is indeed Russian. While the referendum that preceded Russia’s annexation did not meet international standards, few dispute the fact that the annexation was popular with the majority of Crimeans.

In a social survey Dr John O’Loughlin and I organised in Ukraine in December 2014 (administered by the independent polling firm Levada Center), some 84 per cent of respondents declared that the decision to join Russia was absolutely the right move.

A majority of all groups sampled (ethnic Russians, Ukrainians and Tatars) supported the annexation. Other polls have suggested similar results.

Like a pragmatic businessman, therefore, Trump’s attitude may simply be a recognition of demographic realities and market sentiments. Admittedly, though, Trump is not well known for realism and respect for facts.

A second explanation is more sinister. It holds that Trump is deeply compromised by his long history of financial dealings with Russian businessmen, criminal groups, and covert intelligence agents. Growing numbers of books have documented these ties and raised disturbing questions about Trump’s exposure to possible blackmail.

The sensational allegations in the Steele dossier (of collusion between Russian state intermediaries and the Trump campaign during the 2016 US presidential election) are now well known, but we await the report of special counsel Robert Mueller on hard evidence of this alleged collusion.

Historian Timothy Snyder has written that Trump was a business failure who was rescued by Russian money and instrumentally used to wreak havoc with American political reality. Surrounded by figures with financial ties to Russian oligarchs, it is, critics argue, hardly surprising that Trump is sympathetic to the Kremlin on Crimea.

A third explanation is that Trump’s inclinations on Crimea are in keeping with a tradition in US foreign policy that is comfortable with the unilateral use of force to overcome troublesome problems in international affairs. This tradition is dubbed “Jacksonian” after Gen Andrew Jackson, whose Indian Removal Act (1830) justified state land appropriation and ethnic cleansing.

Trump chose Jackson’s portrait to grace the Oval Office during his tenure, and there are many signs that his foreign policy is Jacksonian in spirit. For example, over the past year Trump has repeatedly advocated the idea of a US invasion of Venezuela to end instability there. In moving the US embassy in Israel to Jerusalem, Trump implicitly endorsed the Israeli government’s territorial claim to all the land of that contested city.

Trump appears accepting of strong states using force in their neighbourhoods, and annexing territory irrespective of international law. Strength is the overwhelming virtue in the Jacksonian tradition. It is also in Trump’s world. Only self-sufficient states, those “winning” by the metrics of military defence spending and economic trade surpluses, are strong states.

For Trump, the geopolitical is personal. Masculinist anxieties about fading power, dissipating greatness and plotting subordinates provide the language of problem description. Masculinist fantasies of salvation by strongman leadership provides the language of solutions.

A recent bumper sticker encapsulation of the Trump Doctrine by an official in his administration – “We’re America, bitch” – reveals the structure of feeling of Trump’s foreign policy, to say nothing of his own personal disposition toward Germany.

Trump’s masculinist code extends respect to other perceived “strong men”. But, by the terms of this code, Trump will meet Putin as the weaker party, for he is an aspirational authoritarian, tied down by laws, alliances and investigations, before an authentic one, a man answerable only to himself.

This may account for why Trump is solicitous and respectful of Putin in conversation in a way he is not with Angela Merkel. Certainly Trump’s manifest comfort with authoritarians creates the potential for another “deal between two dictators” in Helsinki, one based perhaps on another defiantly unilateral gesture from Trump, as in Singapore. It is a prospect that has many very worried, for it just might signal the beginning of the end of the transatlantic alliance.

Dr Gerard Toal is professor of government and international affairs at Virginia Tech’s campus in the Washington DC metro region. His latest book is Near Abroad: Putin, the West and the Contest for Ukraine and the Caucasus