Former Sinn Féin leader Gerry Adams has called for calm and challenged those responsible for attacking his Belfast home on Friday to meet him. Video: Amanda Ferguson 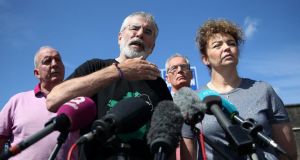 Former Sinn Féin leader Gerry Adams has called for calm and challenged those responsible for attacking his Belfast home on Friday to meet him.

Speaking to reporters on Saturday morning the Louth TD urge everyone to remain calm.

Mr Adams said he did not know who was behind the “serious attack” or why he had been targeted, but he made a direct appeal to speak to them.

Over the last week there has been rioting and attacks on police in the North, which the PSNI says has been orchestrated by the dissident republican group, the New IRA.

All well here. No one hurt. Thanks 4 all the texts & phone calls. Thanks 2 all the great neighbours, the Neighbourhood Watch & Sinn Féin reps who were here very quickly.

There are no further details at this stage.

Completely condemn the leaving of dangerous devices outside the home of Gerry Adams and others in West Belfast. Someone could have been seriously hurt. People in West Belfast are fed up with these actions and want an end to bombs and guns on our streets!

“There my be a connection to what is happening in Derry,” said Mr Adams.

Mr Adams said Sinn Féin supported the residents of the Bogside wanting to live their lives in peace and that party president Mary Lou McDonald had sent out a strong message on Friday when she said those responsible for the violence “do not act in our name” and will not be allowed to “drag us back to the past.”

Mr Adams said his grandchildren, who were in the driveway of his home minute before the attack, were “all grand”.

He said he was thankful nobody was hurt.

Sinn Féin policing and justice spokesman Gerry Kelly MLA has described the attacks as “the desperate acts of increasingly desperate and irrelevant groups”.

People Before Profit West Belfast MLA Gerry Carroll said people in the constituency “are fed up with these actions” and SDLP leader Colum Eastwood MLA described the attacks as “disgraceful”.

Alliance leader Naomi Long said the targeting was a “deliberate and calculated attempt to cause fear and raise tensions within our community”.

Detectives are investigating the incidents at the two addresses after reports were received of loud bangs at both locations at around 10.50pm on Friday.

A PSNI spokesman said: “Officers attended and carried out searches, and have seized remnants of large industrial, firework type devices, capable of causing serious damage or injury, at both locations.

“There were no reports of any injuries, however, a parked car was damaged at one of the houses.”