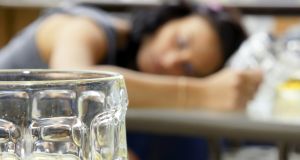 Drunk people should be kept in “intoxication holding areas” in city Garda stations so they are not clogging up emergency departments in hospitals, a Fine Gael Senator has said.

Jerry Buttimer said EDs across Ireland are seeing “unacceptable numbers” of people turning up because they are drunk.

“These people, many of whom have no ailment other than being severely drunk, are clogging up the system for genuinely ill people who find themselves waiting for hours on end to be treated. This cannot continue,” the senator said.

The idea of a so-called “drunk tank”is not a new idea, he added. “ Mobile or permanent drunk tanks have been used in many other EU Member States to good effect. Swedish police stations contain units for people who are a danger to themselves or others, to sober up, get basic fluids and care.

“In the United Kingdom, mobile drunk tanks are regularly observed at large scale events such as concerts and festivals.

“I suggest that similar facilities here could be funded through the small fines issued against people found drinking on the streets or intoxicated in public places,” he said in a statement.