Petrol bombs aimed at police as disorder flares in Derry 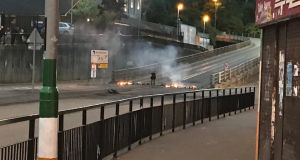 A fire was started at the bottom of the flyover in the Bogside area of Derry. Photograph: Aoife Moore/PA Wire

Disorder has flared in Derry for a sixth successive night following Twelfth of July celebrations in the city.

Youths in the city’s Bogside threw petrol bombs at police and random passing vehicles on Thursday night and also lit a fire on a main flyover.

The disturbances in the republican neighbourhood came after the city hosted Twelfth of July Orange Order commemorations.

Youths wearing hoods and masks, some of them of a very young age, were among a crowd of about 200 that gathered as trouble erupted in the Bogside on Thursday evening.

At one point a hooded rioter hurled a petrol bomb at the windscreen of a passing van from point blank range.

The majority of the petrol bombs were aimed at police stationed on the historic city walls overlooking the Bogside and on Fahan Street leading to the city centre.

Police Service of Northern Ireland (PSNI) Land Rovers were engulfed in flames on a number of occasions.

PSNI officers were still on the ground in the early hours of Friday, “dealing with disorder and attacks on vehicles.” A statement said officers had been responding to victims of crime and reports from “vulnerable people in need of urgent assistance”.

“Over the past few days police officers in the city have been repeatedly targeted with missiles including petrol bombs, but despite this they have continued to deliver a policing service and deal with calls ranging from domestic abuse to drugs, as well as carrying out searches for missing people and provide assistance to our colleagues in the other emergency and rescue services,” said the statement.

“We know that the majority of people in our community abhor the violence we have seen on the streets over recent days and support us in our efforts to bring it to an end.”

The PSNI expressed “regret” at the latest outbreak of disorder.

“It is clear that there are young children involved,” said an earlier police statement. “Parents — make sure your children aren’t involved.”

It was the sixth night of violence in the area. This week has already witnessed two dissident republican murder bids against police officers in Derry.

On Tuesday night a volley of machine gun fire was directed at officers and on Wednesday night two pipe bombs were thrown at police. No one was injured.

As well as police, rioters have also targeted homes in the nearby unionist Fountain estate.

Masked men hijacked and torched vehicles amid anger about moves to reduce the size of two loyalist Eleventh Night bonfires.

Thousands of Orange Order members took part in Twelfth of July parades across Northern Ireland on Thursday to mark the 1690 victory of Protestant King William of Orange over Catholic King James II at the Battle of the Boyne.

It was the biggest date in the Protestant loyal order parading calendar.

Sinn Féin MLA for Foyle Karen Mullen says she hopes the violence that has afflicted Derry will end now that the 12th of July has passed.

“I hope because the march is over we can get the city back to normal,” she said.

She blamed dissident groups for the violence, accusing them of hiding behind children.

“We would ask them to desist and to get out of the area,” she told RTÉ’s Morning Ireland. “I call on any one with influence to bring this to an end because the residents of the area are absolutely terrified.”

Ms Mullen said she had been up all night dealing with calls from residents and working with the PSNI when it looked like it might be necessary to evacuate a street when an explosive device was found.

“We expected petrol bombs and burning, but we didn’t expect explosive devices and pipe bombs. This is not good for our city,” she said.

She said that Sinn Féin wants peace and condemned the attacks.

“This should no longer be happening. We’ve had 20 years of peace,” she said.

“A small minority are trying to drag us back to the past.”

The Catholic Bishop of Derry, Donal McKeown says that the “real conflict” in Derry is between the police and disadvantaged and disaffected young people caught up in a intra-republican conflict.

He told the same programme that the violence is not sectarian. It is an attempt to provoke the police so that Sinn Féin can be blamed for supporting the PSNI, he said.

The violence is primarily between police and groups on the Bogside, he said.–Additional reporting: Press Association