Country-by-country guide to Spain, Portugal, Italy and other hot spots as they begin to reopen 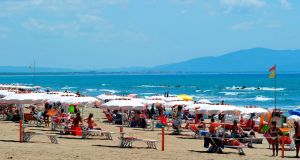 People enjoy a sunny day on the beach in Tuscany’s Castiglione della Pescaia in Italy. The country’s international borders are due to open to tourists on June 3rd. Photograph: Jennifer Lorenzini/LaPresse via AP

With the summer almost upon us, holiday plans are coming ever more sharply into focus. With Ireland’s phased exit from lockdown unlikely to give the green light to overseas travel before August, even talking about when other countries are opening may well be moot. But the timetables for a restarting of tourism elsewhere at least offer a glimmer of hope that things are slowly starting to return to normal.

By far the most popular overseas tourist destination for Irish holidaymakers, Spain has been one of the countries hardest hit by the pandemic. While things have improved from a public health perspective in recent days, with the government preparing to lift its state of emergency on June 7th, it will re-open to tourists slowly and the authorities there have indicated that the initial focus will be on domestic – and not international – tourism. Hotels in Spain have been able to reopen some facilities since May 11th but many will remain closed until borders open.

And when will that be? At the start of this week, it was confirmed that Spain would start to welcome foreign tourists back from July 1st, ending its two-week quarantine policy. “The worst is behind us,” Foreign Minister Arancha Gonzalez Laya tweeted with emojis of a bikini, sunglasses and a suitcase. “In July we will gradually open Spain to international tourists, lift the quarantine [and] ensure the highest standards of health safety. We look forward to welcoming you!”

The Canary Islands and Mallorca, islands that were spared the worst ravages of the virus, will most likely be first to welcome tourists, with the former set to trial digital health certificates in July, in partnership with the World Health Organisation. This week the beaches in several regions, including Andalucia, the Balearics and the Canary Islands opened although limits have been imposed on visitor numbers and umbrellas have to be at least four metres apart.

While visiting castles in Durham is apparently okay – at least for some people – there is likely to be few tourist comings or goings in the UK until the start of July at the earliest. UK campsites, hotels, holiday parks and tourist attractions are gearing up to reopen on July 4th when that country will go into ‘phase 3’ of its lockdown exit plan.

As it stands, emergency measures are set to be in place until July 24th with the government there banning non-essential trips. Borders with Switzerland and Germany are likely to open on June 15th. Some shops are now open and restaurants and bars may be given the green light on June 2nd.

According to the French embassy in Dublin says the authorities there “will later specify their recommendations concerning possible trips for summer holidays and related measures”. As of this week people coming from European Union member states [except Spain], Andorra, Iceland, Liechtenstein, Monaco, Norway, San Marino, Switzerland, are  not be subject to any sanitary measures if they show no symptoms of a Covid-19 infection.

The Greek government has said June 15th is the official start of its tourist season in 2020, although direct international flights will not resume until July 1st. The first overseas tourists will most likely come from neighbouring countries by car and from June, shops, restaurants, cafes, cinemas, hotels, and amusement parks will slowly start to re-open. Greece has restarted regular ferry services to its islands. From the middle of June, foreign arrivals won’t have to self-isolate but they may be subject to Covid-19 testing although details have yet to be announced.

Where is the first place you plan to travel to on holiday after Covid-19?

Borders are set to reopen on June 3rd at which point tourists will be able to visit without any need to self-isolate. People will also be able to move from region to region on the same day. Whether many overseas tourists will actually travel to Italy is very much in doubt, given restrictions that remain in place virtually everywhere else. The authorities in Sicily have offered to pay half of visitors’ flight costs and a third of hotel expenses if they visit later this year, which may be worth keeping an eye on.

Restaurants and bars in many regions are already open and working at a reduced capacity, while in the Algarve, hotels are open and beaches are due to follow suit in June. There are plans to give hotels that meet the standard a “Clean&Safe” status, which will indicate that they have recommended hygiene and safety procedures in place. On beaches, people will have to stay 1.5 metres apart while parasols will have to be placed at least three metres apart. The authorities there have also developed an app, which uses red, yellow and green to alert people about crowds on beaches. However an official date for the reopening of Portugal’s borders to international visitors has yet to be confirmed.

There is still no fixed date for a re-opening of borders and at the moment, arrivals must self-isolate for 14 days. Masks are mandatory in shops and on public transport.

The island will begin to re-open in stages from June 9th to July 13th. It is mulling over proposals which would see tourists asked to take Covid-19 tests before arrival. Initially it will look to bring tourists from nearby countries where the virus has been somewhat contained, including Greece and Israel.

Borders with neighbouring countries will start to re-open in the middle of June although it is not likely to resume tourism in a significant way until later in the summer at the earliest. Hotels in Berlin can now reopen but the city has embarked on a new tourism strategy. “We don’t think people want closely packed big-city bustle at the moment,” Burkhard Kieker, the head of VisitBerlin, told RBB Inforadio, so the agency has been promoting “how much green space and how much water there is” in Berlin.

The Trump administration was very fast to stop international travel to the country March but it is likely that re-opening it to tourists from overseas will take considerably longer and happen in a more staggered fashion. Any decision on easing travel restrictions will depend on what safety protocols other countries put in place to limit the spread of Covid-19 and if countries grant entry to Americans, US officials told Reuters. The priority in the US will be to restore confidence in US domestic air travel before turning attention to international travel and that may not happen until the end of the summer at the earliest.

While Bangkok Airways restarted domestic flights on May 15th, an international flight ban will remain in place until June 30th. Its borders will most likely be opened first to countries such as China and South Korea.

Borders are open tourists from Schengen countries and for essential travel only for people from elsewhere, including Ireland. Restaurants and bars that have outdoor terraces will be allowed to open from June 1st and campsites and holiday parks, which are now open, have communal facilities closed until July 1st.

In the first stage of reopening to visitors, cross-border travel will be permitted with neighbouring countries as long as the virus profile is similar. Austria’s borders with Germany, Switzerland, Liechtenstein, the Czech Republic, Slovakia and Hungary will open on June 15th. People seeking to enter the country without having to self-isolate will need a health certificate giving them the Covid all-clear.

The country plans to open to international tourists by June 15th with an announcement about how it plans to proceed due by the end of the month.

Places like Cancun, Tulum, and the Mayan Riviera are all aiming to be open to international travellers by early June. Local media has quoted the Quintana Roo tourism board – the region that is home to many of the major big tourist spots – as saying that with the resumption of flights from the US, Canada, and the recovery of tourism, new hygiene protocols will be put in place.

According to the government there, it will be open to tourists by June 15th although all arrivals will have to take a Covid-19 test if they want to bypass a 14-day quarantine.