Wildlife on the waterways: a guide for city dwellers

Otters, kingfishers and dragonflies just some of the creatures to be found along our rivers 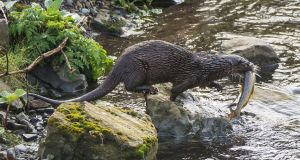 An otter catches a sizable trout from the river Dodder in Milltown, Dublin. Photograph: Brian Tansey

The wildlife along river and canal banks – particularly in urban areas – can provide calm relief and quiet pleasure for people of all ages. While some water-loving creatures can be elusive and hard to spot, going for walks at different times of the day can sharpen your observation skills and increase the enjoyment.

Irish rivers have come under a lot of pressure from pollution from agriculture, forestry and urban development in recent years. The 2019 report on water quality from the Environmental Protection Agency (EPA) found that there are now just 20 pristine river sites in Ireland compared with more than 500 in the late 1980s.

This report also found that water quality is getting worse after a period of relative stability and improvement. We now have an increase in the number of the most polluted river sites, and the number of rivers in poor ecological health is also increasing.

These findings make it more important than ever for local authorities, landowners and industries to work together to reduce pollution levels. Community involvement in river clean-ups needs to be combined with enforcement of breaches of environmental legislation.

Clean water is an essential for all species if we want to continue to enjoy the wildlife on our waterways in the future. Here is just a sample of what you can see while walking safely along river banks either in urban or rural parts of Ireland.

A recent survey of otters in Dublin found that the rivers in the capital city are highly important passageways for wildlife and particularly important breeding areas for otters. That otters can continue to survive in densely populated areas may come as a surprise to readers. But, the discovery points out – yet again – how the natural world coexists with human activity even if sometimes we don’t even notice it.

Otters are shy animals that mainly come out at night so therefore are difficult to spot. Because they are a protected species under the EU Habitats Directive, Ireland is required to monitor and conserve otter populations. The authors of the Dublin otter survey 2018/2019, Bill Brazier and Ross Macklin found that otters were more active in less disturbed areas of the city’s rivers and streams. However, they were also present in more urban parts of the river which had mature trees or high walls separating the river from humans.

Otters paddle at the surface of the water or rest with only the nose and eyes breaking the surface. They often have several burrows or holts in the root systems of trees along the edges of the river banks. These burrows can have several access points. Their cubs are born at any time of year but are more likely to survive if born in the summer months. Your best chance to spot them is on a dusk walk in a quieter stretches of rivers and canals.

The kingfisher with its bright orange front and turquoise blue wings and electric blue back is seen widely along Irish rivers, streams and canals. Kingfishers breed in tunnels dug in to the vertical banks of streams and rivers and rarely move from their territories. In spite of their distinctive colouring, you could often miss them as they perch motionless on branches beside a river or a stream, on the look-out for fish.

A four-year survey of kingfishers completed by Birdwatch Ireland for the National Parks and Wildlife Service in 2010 found that kingfishers were thriving across the country. Traditionally a symbol of peace and prosperity, kingfishers can live for up to 21 years.

Grey herons are another bird species that live close to rivers, canals and lakes. With their long white neck, black crown and pointed bill, they are common throughout Ireland. You can often spot them standing patiently, waiting to catch their prey (fish or frogs) with a fast sudden stab of their dagger-like bill.

They live in colonies called heronries, building nests on tops of trees and bushes. You can also sometimes see them flying along rivers or canals. “They are unmistakable with their broad slow wing span and their long legs trailing out behind them,” writes Éanna Ní Lamhna in her book, Wild Dublin: Exploring Nature in the City (O’Brien Press).

The dipper, the grey wagtail, the mallard, the moorhen, the little grebe, the mute swan and the cormorant are other birds that can be spotted close to rivers, according to Niall Hatch of Birdwatch Ireland.

The presence of dragonflies and damselflies near waterways is an indicator of good water quality. These colourful insects spend their days flying up and down canals and rivers, catching smaller insects on the wing. They rest on the tall reed vegetation along the banks. They are particularly active on hot summer days.

There are about 24 different species of dragonflies and their smaller relatives, damselflies in Ireland. The long thin bodies and double pairs of almost translucent wings are common to all species.

In 2019, a new study of dragonflies and damselflies run by the National Biodiversity Data Centre and the Centre for Environmental Data and Recording for Northern Ireland (CEDaR) began in Ireland. The aim of the project is to improve the knowledge of the geographical spread of these colourful insects and their habitats.

If you live near a river or canal, you can record and submit your sightings of dragonflies and damselflies to biodiversityireland.ie.

STORIES FROM THE WATERSIDE

Stories from the Waterside is a new storytelling competition that encourages people across Ireland to share stories of what makes their local river, stream, canal, lake, estuary or seaside special in 600 words or less. Open to all ages, the competition is run by the Local Authority Waters Programme, Inland Fisheries Ireland, the Heritage Council and Waterways Ireland.

Stories can be memories from childhood, information about wildlife, heritage or traditions in your local area. Only previously unpublished pieces will be accepted. The closing date is May 31st, and entries can be submitted online to watersandcommunities.ie or by email to stories@lawaters.ie or by post to Local Authority Waters Programme, The Lodge, Ballingarrane Estate, Clonmel, Co Tipperary. Downloaded entry forms must be included with stories.

‘Did I miss anything?’ A modern Rip Van Winkle emerges, blinking, into lockdown
4