What do you do when you meet a bear on a walk? Copy this 12-year-old 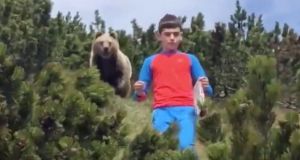 Bear essentials: Alessandro Breda walks away from the bear he encountered on a family walk in an Italian nature park. Photograph: Twitter/Loris Calliari

Showing remarkable aplomb, 12-year-old Alessandro Breda slowly tiptoes down a scrubby hill during a walk in the Dolomites. “Photo,” he whispers hoarsely to his companion, Loris Calliari, who assures him he’s taking one. “Come, Ale, come,” says Calliari. “Don’t turn your back to him.”

“Him” is the sizable brown bear shadowing the boy as he makes his descent during a family hike. Alessandro loses a smidgen of cool only after his grandmother, waiting below, becomes aware of what is happening and begins howling with fear. “Stop! Stop!” Alessandro urges her. But even then he manages to keep his grip on a bag of pine buds he has been gathering.

The scene was captured on video on Sunday by Calliari – the boy’s mother is his girlfriend – during the hike in the Adamello-Brenta Nature Park in Trentino, in northern Italy.

Alessandro’s remarkable composure is no accident. In an interview with the Italian broadcaster RAI, he says he recently watched a video on how to behave if you run into a bear. “I’d learned that if you yell, the bear becomes agitated and becomes much more aggressive,” he explains. In fact, Alessandro did everything he was supposed to do. He kept his cool, didn’t yell and walked slowly away, as experts advise.

There are between 82 and 93 bears residing in an area that includes the nature park of nearly 1,500sq km, according to the department’s most recent report, but conflicts there between human and bear are rare. There have been three maulings in the area since 2014.

“In all three cases they were females who thought their cubs were at risk,” says Claudio Groff of the large-carnivores division of the forestry-and-wildlife department of the Autonomous Province of Trento. In Alessandro’s case, Groff says, “the bear was clearly not aggressive, and the boy behaved well.”

Marco Galaverni, scientific director of WWF Italy, says that such encounters, especially at such a close range, are rare in the Alps. He, too, says that the bear Alessandro ran into had not been behaving aggressively and that it was “merely curious about a child with something in his hand”.

Although the video shows the bear rearing up on its hind legs a few times, that is not threatening behaviour, Galaverni says. Bears don’t see well, he explains, so they rise up “to study the situation and capture more smells”. “When a bear is feeling aggressive, it makes that pretty clear.” So while the episode captured on video might have been scary, Galaverni says, the actual risk to the boy was relatively low. “You’re much more likely to be attacked by a neighbour’s dog.”

Calliari, Alessandro, his mother and other family members encountered the bear while hiking above 2,000m. They had gone to pick the buds of the mugo pine tree, a shrubby evergreen that grows low to the ground, which are used to make syrup.

Bears like to bed down in the trees during the daytime hours, when they are less active. “I’m pretty sure that the bear had been sleeping, because we hadn’t seen it coming up,” Calliari says. Calliari had watched the bear-safety video with Alessandro, so he also knew what to do. He felt confident, he says, that the bear would not attack, which is why he took the video. The attacks came only later, after he had posted the video online. “I’ve been bombarded with telephone calls,” he says.

Alessandro says in the TV interview that he loves nature and animals and that he thinks the bear “behaved well” toward him. Calliari says that Alessandro is not at all shaken by his close encounter with nature and that he can’t wait to go hiking again. Are he and the boy’s mother equally enthusiastic? “A little less,” Calliari says. – New York Times