‘It’s not a nice atmosphere’: Dead calm in Dublin Airport

In eerily silent terminals, the emptiness is wearing the remaining staff down

With fewer than 300 passengers a day and almost all the shops closed Dublin Airport is a surreal place in lockdown. Video: Enda O'Dowd 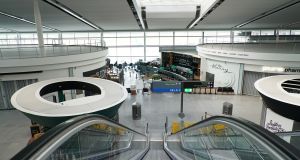 At 11.16am on Tuesday there is no luggage going through the system at Dublin Airport. Not one single bag is moving from planes to baggage halls, or from check-in desks to planes ready for take-off.

The airport is open, but at a virtual standstill. Over the course of two hours, just a handful of passengers make their way through the sprawling complex. None look happy to be there.

“It gives me the chills to see it like this,” the airport’s head of external communications, Siobhán O’Donnell, says before she rattles off a dismal set of statistics.

Before Covid-19 changed everything, 750 planes would take off and land at Dublin Airport daily. On Tuesday just 28 are listed, and most of these are almost empty.

“On this day last year we had 102,000 passengers,” says O’Donnell. In the first wave of flights between 6am and 8am – the airport’s busiest time – 36 people go through Terminal 1 and 56 people depart from Terminal 2.

“No one wants to travel now. There is no one going on holidays and anyone coming or going is most likely being repatriated,” she continues.

Moments later she is interrupted by her own voice – for she is the voice of the airport’s public address system – making an announcement that reminds people to keep their distance, even though there are few to stay apart from.

The voice echoes around the cavernous halls. “That’s me,” O’Donnell says. “We needed to get something out in a hurry, so I recorded it myself.”

This is a 21st-century Marie Celeste – travel frozen in time

Boxes of Cadbury Creme eggs, stocked ahead of an Easter rush that never arrives, are stacked up in the shop across the way while a St Patrick’s Day poster for Jameson has a message for travellers. “Don’t stay in, join in,” it implores. It could scarcely be more out of step with the times. This is a 21st-century Marie Celeste – travel frozen in time.

Most of the airport’s services have been “mothballed”, waiting until things reopen. When this happens, they will look different to how people remember them.

Already, plexiglass dividers have been installed at the cash registers in the shops, and the signs alerting people to the need to socially distance are everywhere.

As O’Donnell walks, she looks at all the shut-up shops. “The intoxicating colours and the activity and the excitement of all the people going on holidays is gone. Now there is nothing,” she says. “Dublin Airport is the economic heartbeat of the country. It contributes €8.4 billion to the economy, and 20,000 people work here and many thousands more supply it with services. It is a showcase for Ireland’s crafts and foods. It drives huge sales of whiskey and more recently home-produced gins. That is all just gone.”

In the airport control room, the smell of disinfectant is strong. There are just three people on duty. The CCTV screens are empty and the real-time computer-generated map recording all airport movement is still.

“It is hard on everyone here,” says airport duty manager Shirley Wedick. “It’s not a nice atmosphere but we have to stay open for cargo movement and repatriation.”

Dublin must also stay open because it is a key “alternative airport” for international flights that have medical or aircraft emergencies. The State’s smaller airports are closed at night.

If any flight close to the island gets into trouble, Dublin Airport is needed as a place always open to help. “We have had a couple of emergency landings since the lockdown” she says. “They were medical emergencies.”

The atmosphere has changed. You can sense the crisis is getting to everyone

On a normal day, the weather would be Wedick’s primary concern. “That can really determine your day,” she says. There is an early morning conference call with air-traffic control, Met Éireann and both Ryanair and Aer Lingus as the airport’s primary stakeholders. “The calls are still happening but they are much shorter and the atmosphere has changed. You can sense the crisis is getting to everyone,” says Wedick.

Mark Brennan is in charge of ensuring the baggage operations across the airport are working. His team look after all the X-ray machines and the complex system of carousels and conveyor belts.

If laid out end-to-end, the belts would run for 10km, capable of dealing with the possessions of thousands of passengers. “We will probably only do around 200 bags today. This day last year it was 22,000,” he says.

The behind-the-scenes luggage area in Terminal 2 is the size of three football fields. “On any normal day this would be buzzing with people moving luggage all over the airport. I can’t get my head around it really,” says Brennan.

He is making the best of things and is using the standstill to maintain and clean everything. The conveyor belts that are normally pocked with gum and stickers from suitcases are gleaming.

In the Terminal 2 shopping complex, the silence is eerie. A contractor in heavy metal boots appears at one end of the concourse. It is so quiet that the small bunch of keys around his neck can be heard jangling from more than 50m away.

“I have never seen it like this, except maybe on Christmas Day,” says an airport police officer, identified only as Aisling.

“Even during the bad snow of two years ago, there were still people in the airport. There were still things happening. We do a lot more patrols on foot now as we only have one officer in each car. It’s great for getting my steps up,” she says, before she heads off for another walk in the emptiness.

Out on the runway, there is evidence of another reason the airport is staying open despite the Covid-19 restrictions, as an Aer Lingus plane touches down after a flight from China.

It carries no passengers. Instead, its cargo hold and seats are stuffed with 13 tonnes of boxes of essential face masks, gowns and other kit for health workers. It is quickly emptied and sent on its way. The airport falls silent again.

‘At night I would go to my room to quietly drink.’ Irish women and addiction
8