Red admiral or painted lady? Get to know your butterflies

These colourful, fascinating creatures are worth keeping an eye out for 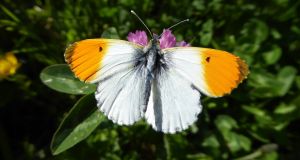 Orange tip butterfly is an easy one to recognise, as long as you are looking at a male. Photograph: Jesmond Harding of Butterfly Conservation Ireland

We owe to butterflies the topical and powerful metaphor of cocooning. They might perhaps also teach us that this strategy is not only protective, but transformative, even transfigurative.

While pupating in its cocoon, the earth-bound, creepy-crawly caterpillar shape-shifts to become an exquisite and elusive creature of flight, the distilled essence of spring and summer days. This classic metamorphosis has made butterflies almost universal symbols for the rebirth or resurrection of the soul to a sublime condition, whether during this life or after death.

The ancient Greeks gave the same name, psyche, to the soul and to the butterfly; the myth of Eros and Psyche dances with butterfly images. They have inspired broadly similar stories from Aztec Mexico to medieval Ireland.

The biological life cycle of these insects is as wondrous as any classical myth. The female butterfly emerges from cocooning with her abdomen already heavy with eggs, generally mates within hours, and deposits the fertilised eggs only on species-appropriate plants. The eggs hatch into caterpillars (larvae), who find their dinner laid out under their noses. Their voracious feeding grows them fast, through several skin-shedding phases, known as instars, often changing colour and shape.

Many caterpillars (the process varies) eventually spin a silk cocoon, which generally hardens into a chrysalis. Inside, they pupate, reshuffling almost all their cells like biological magicians. They then burst forth in their final “imago” costume as fully-formed butterflies, sometimes within weeks of cocooning, sometimes after overwintering. In their new incarnation, they have much more refined appetites, feeding elegantly on nectar, and are important pollinators. They have sex as soon and – at least in the case of males – as often as they can, and the cycle starts again.

If you can find a caterpillar food plant, nettles being the easiest, in your garden or nearby, you may be able to follow this dramatic process unfolding over several spring or summer weeks, even under conditions of Covid-19 confinement.

An easy one to recognise, as long as you are looking at a male: small and white, its upper forewings have an unmistakable orange splash across the outer edges, though the tips are actually a dull black-brown. The hindwings are entirely white.The female, however, looks very like the Small White butterfly on top. But the underwings of both sexes have distinctive greenish, lichen-like mottling. The main food plant is lady’s smock (cuckoo flower), where you should look for clusters of tiny orange eggs on the flower head. The caterpillar goes through four instars, finally blue-green with hairy warts. Adults fly from April to June.

Also known as the cabbage white, and unpopular in vegetable gardens. Like many species, they produce different broods, with slightly different markings, in spring and summer. The male’s upperwings are all white, with grey tips to the forewings (spring) or black tips (summer). The female has additional black spots on upper forewings, yellowish upper hindwings. Both sexes have yellowish hind underwings. Eggs yellow. Mature caterpillar blue-green with yellow side-stripes, warted and hairy. To distinguish four white species see: https://butterfly-conservation.org/news-and-blog/how-to-identify-white-butterflies

This name is a double giveaway, for colour and spring food plant, as is its flight in early April: the Common and Small Blues don’t appear until mid/late May. Upperwings are pale powder blue in male, fringed prettily with black and some white. Females more vivid blue, with more black. Underwings of both sexes tinted blue but much paler, with some dark markings. Summer brood food plant is ivy. White eggs like “miniature squashed golfballs” on holly, and later ivy, flower buds. Mature caterpillar very variable, burrows into buds.

Adult loves purple flowers, and is one of the species that makes the Buddleia the “butterfly” bush. Likes rotting fruit, too. Dramatic splashes of scarlet-red across big black upperwings with large white patches on forewings, and delicate scalloping on edges. Cylindrical eggs, green then darkening, on young nettles. Caterpillar usually dark, chrysalis grey with striking gold highlights. Mostly a migrant from the continent, but increasingly resident, and may fly in winter.

On everyone’s favourites list, and another lover of Buddleia nectar. Upperwings dull red, but dramatically enlivened by four blue and buff-cream “eyes”, beautiful to us but designed to scare off the hungriest bird. Underwings very dark. Sexes alike. Flies April-September, hibernates. Eggs cylindrical, under young nettle leaves. Mature caterpillar velvet-black with white dots, with each of its distinctive segments crowned by a spine like a tiny Christmas tree.

Confusingly named, because the overall impression is of a large, orange, fast-flying butterfly, often vanishing before you get a fix on it. Settled with wings spread, the delicate tracery of fine dark markings on the orange background of the upperwings is very striking, especially in the brighter male. The hind underwing has a greenish wash, with strong silver flashes, and mauve inner edging. A very subtle beauty. Flies mid-June to August. Eggs at foot of oaks, hatched caterpillar hibernates in tree crevices, emerging to eat nearby violets. Large, spiky “horned”, caterpillar with lateral white stripe. Chrysalis, suspended among violets, vibrates energetically if touched.

The name is a good guide for this dark woodland species, with cream speckles and fringing on upperwings, and prominent similar spots, one on each forewing and three on each hind wing, with dark and light centres mimicking eyes. Underwings cryptic. Sexes quite similar. Three, even four, broods, and in flight from March or earlier to September. Egg a greenish ball, laid in thick grass. Mature caterpillar vivid green with some yellow.

Variable, but male generally has dark upperwings with concentric circles of orange, black and white forming “eyes” on forewings. Female a little lighter, similar pattern. Underside forewing quite light orange, still showing that threatening eye, in both sexes, with hind underwing dark in male, lighter in female. Confusable with the rare and localised Gatekeeper, but latter is much warmer coloured. Flies June to September. Egg on grass, caterpillar light and dark green.

This migrant from Africa made a big splash last year, arriving in very exceptional numbers all over the country. Similar size and shape to red admiral, with black and white upper wing tips, but more subtle patterns with orange, not red. The migrants arrive quite faded, but if they come in sufficient numbers to breed widely, the newly emergent adults in August are a special delight.

Status of butterflies in Ireland: https://www.biodiversityireland.ie/wordpress/wp-content/uploads/Butterfly-Monitoring-Newsletter-2019_lores.pdf

What will happen to house prices after lockdown?
7