Two months on, he’s still the only resident in one of Barcelona’s luxury hotels

Daniel Ordoñez is living alone in a hotel that charges up to €13,500 a night for a room 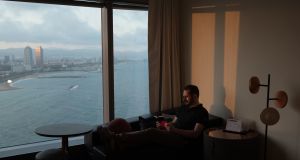 Daniel Ordoñez reads in his room on the 24th floor of the W Hotel in Barcelona. Ordoñez has lived there since March, the sole occupant in the luxury hotel. Photograph: Samuel Aranda/The New York Times)

Every five days, Daniel Ordoñez opens 1,400 pipe taps in a waterfront hotel in Barcelona that locals call “The Sail” because of its shape.

Each tap has to run for about five minutes, so the task takes him a full day.

“It’s probably the most boring part of my job, but it’s needed,” he said, to avoid a form of pneumonia that can be spread by bacteria in the water: Legionnaires’ disease.

Ordoñez, who is in charge of maintenance at the hotel, has been its sole continuous occupant for the past two months, wandering its ghostly halls because of another illness that has ravaged the country and the globe: Covid-19.

When the hotel closed in mid-March as part of a nationwide lockdown to contain the spread of the coronavirus, Ordoñez, an industrial engineer, agreed to self-isolate inside in order to avoid any deterioration of the premises that could delay its reopening, whenever that might be.

He now lives alone on the 24th floor, which gives him an unrivaled view of the city, its beaches and the Mediterranean.

“At the start, I thought I would be here for about two weeks,” said Ordoñez, who is single. “But now it’s been eight, with no clear end in sight.”

Arguably Barcelona’s most emblematic luxury lodging, the W Hotel stands 325 feet tall and 27 storeys high, dominating the city’s waterfront. Some might find walking its deserted corridors, peering into its vacated salons, or dining alone on a plate of fried chicken and vegetables cooked in a cavernous restaurant kitchen unsettling, but Ordoñez does not.

“It’s been a bit weird to watch my few socks spin inside the washing machine of a huge laundry room, but I’ve now also had time to get used to that,” he said with a wry smile in a recent interview with a visitor from a safe distance.

With an official death toll of just over 27,000, Spain has been one of the European countries hit hardest by the coronavirus pandemic. This month, the government in Madrid started to gradually ease lockdown restrictions in order to return the country to what Prime Minister Pedro Sánchez calls “the new normalcy” by late June.

But there is no indication of when Spain will recuperate losses from a tourism industry that accounted for 12 per cent of its economy last year. Foreign visitors face a 14-day quarantine upon arrival, a measure that will be maintained “as long as necessary” to avoid “imported cases” that could annul the gains of the domestic lockdown efforts, the Spanish health minister, Salvador Illa, warned last week.

Ordoñez (37) left behind a house on the outskirts of Barcelona to stay in the grand hotel and continue his maintenance duties. Still, he said, he would stay as long as needed in a hotel where he knows every nook and cranny, from its ventilation shafts to its underground storage areas.

“This was already my second home before the lockdown,” he said.

The lockdowns and border closures imposed around the globe to limit the spread of the coronavirus left many people stranded in unlikely locations, including two friends who hunkered down in an empty London pub or a couple on an extended honeymoon in the Maldives. Many wealthy people fled big cities, finding a haven in their countryside homes or even a wellness centre in Bali.

But the Barcelona hotel’s decision to ask Ordoñez to stay inside highlights a different issue: infrastructures that need looking after, even when business has ground to a halt.

Barcelona, one of Europe’s main tourism destinations, drew almost 12 million visitors last year. Before coronavirus hit, residents and politicians had been debating the impact of this record tourism influx, including issues like the flood of day-trippers disembarking from cruise ships and the proliferation of Airbnb apartments that raised property prices in central Barcelona.

Now the absence of tourists has left Barcelona and other vacation destinations across Spain facing an ominous economic threat.

Exceltur, a Spanish tourism lobby, forecast in March that Spain’s tourism revenues would fall by at least €55 billion this year.

One night in the penthouse at the W Hotel in Barcelona can cost as much as €13,500. The hotel’s management declined to discuss the financial consequences of keeping the suite and its other 472 rooms closed since March, but last week, its parent company, Marriott, reported a slump in first-quarter earnings. Marriott also said that its revenue per available room fell 90 per cent in April.

On his own in the hotel, Ordoñez, who is normally in charge of a crew of 20 maintenance workers, has faced some challenges — such as trying to fix something while standing on a stepladder. Occasionally, he has called on the help of the only other person on duty in the building: a rotating guard who monitors the hotel’s security cameras from a basement control room. (The guard does not sleep in the hotel.)

But there is an upside to working in a deserted space, Ordoñez said. This month, he tested the hotel’s public address system without worrying about disturbing the clientele.

“A fair share of our time normally involves responding to customer complaints,” he said. “This issue has certainly gone away for now.”

Early in Spain’s lockdown, with the country reeling from an increasing death toll and escalating economic devastation, Ordoñez decided to do more than test the taps: He adjusted the curtains and lighting in some rooms to create a giant heart on the hotel’s facade.

It became a beacon of solidarity with the country’s health care professionals. Since the waterfront promenade reopened this month, residents have been taking selfies in front of the heart.

“It felt like a great way of connecting with what is going on outside,” Ordoñez said. – New York Times Service