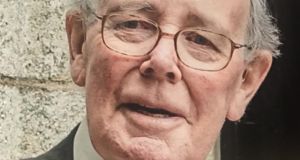 Noel McMahon: widely respected for his hard work, integrity and resourcefulness, he was described as “one of life’s true gentlemen”.

Noel McMahon, who died on August 20th last in his 89th year, was a highly respected senior civil servant who held the position of secretary general of the Department of Transport and Tourism from 1976 until the end of 1989. He will be best remembered for the pivotal role he played in implementing radical changes to the country’s aviation policy and infrastructure during the 1980s which provided a much-needed stimulus to the tourism industry, which had been stifled by an overly restrictive regime up to that point.

He was born on December 21st, 1929, in Mullingar. The family moved to Dublin in the 1930s and settled in Drumcondra. Noel’s father died prematurely in 1939 leaving his wife to rear four young children on her own. Noel was the second in line and the eldest boy. He undertook the Dublin Corporation secondary school scholarship exams in 1942 and finished in third place overall. He completed his secondary education at Intermediate Certificate level, achieving honours in all subjects and a national ranking of ninth place. He entered the Civil Service as a clerical officer in the Department of Industry and Commerce in December 1946. Over the following decades he served in various areas, including civil aviation, labour, tourism, marine and finance, until he was appointed secretary general of the Department of Transport and Power (as it was known then) in April 1976 at the young age of 46.

The 1980s were marked by frequent political change, and during his 13½ years as secretary general he served under 10 different ministers. During his long career, he also held various domestic and international positions, including vice-president of the Assembly of International Civil Aviation Organisation in Montreal and president of the European Civil Aviation Conference (ECAC). Following Ireland’s accession to the EEC in 1973, Noel was a frequent commuter to Brussels, representing Irish interests on transport issues and presiding over various committees working on aviation policy. In 1982 he was awarded the prestigious Order of Leopold by the Belgian royal court in recognition of his services to the aviation industry at European level.

During his term as president of ECAC (1981-1983), he steered tense negotiations between 22 member states in arriving at a common approach when a consensus could not be reached at EEC level.

Garrett FitzGerald (the taoiseach at the time) wrote a personal letter of gratitude to him recognising his achievement in discharging such a difficult mandate so successfully. Such was the unassuming nature of the man that his children were unaware of the existence of the letter until many years later.

Noel was once asked what did he think made a good civil servant. He responded by placing particular emphasis on a strong work ethic and a sense of public service, a high level of discretion, absolute integrity and an open-minded and impartial approach to problem-solving, along with a great deal of resourcefulness.

There is no doubt that Noel possessed all of these qualities in abundance!

Shortly after he retired from the Civil Service, he took up a new position as chief executive of the Advertising Standards Authority for Ireland. He served in that position for seven years, ending in 1997. He also became a lay member of the Complaints Committee of the Law Society of Ireland and he continued in that capacity until 2007.

Having finally reached full retirement at the age of 77, he now had ample time to focus his attention on gardening, golf and grandchildren (he maintained the order was strictly alphabetical!).

In 1948 Noel met Maura Lynch, who had come to Dublin from Eyeries, Co Cork, to work in the Civil Service. They married in 1954 and were happily married for more than 64 years.

Noel will be missed by his loving wife, children Brian, Veronica, Fionnuala and Colette, extended family and many close friends.

Should your pasta drip like Colin Firth as Mr Darcy? The eight rules that explain it all
Real news has value SUBSCRIBE