William (Bill) Ward: A mechanic who made his mark at Aer Lingus 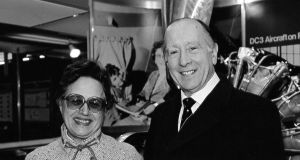 Bill Ward and his wife Marcella

Bill Ward was born in England on January 30th, 1920, of Irish parents. He never doubted that Ireland was his home and he would “return” one day. Having just turned 20, he got caught up in the second World War and signed on to the RAF as a mechanic for the five years of the war.

Under the pressures of wartime, Bill learnt how to repair and maintain large, multi-engine aircraft. At the end of the war, he was given a civvy suit, five pounds and his now-redundant RAF tools.

Postwar, the national airlines of Europe and the US considerably expanded their fleets by buying war-surplus bombers and transport aircraft including Lancasters, DC3s and Dakotas.

Bill Ward related that there was a company in Scotland that converted the planes by stripping out the military fitments, removing guns and armour and painting them in airline livery. This included Aer Lingus, a company then about to make its mark in Ireland

These aircraft had engines that Bill was familiar with. As Ireland had been neutral during the war, there weren’t many Irish with the intimate knowledge and skills of large aircraft that Bill Ward had acquired during his five years of service. On moving to Ireland in 1946, he followed his brother’s advice and applied for work at Aer Lingus, and was accepted as a lead mechanic.

In Bill’s mind, his best accomplishment was establishing Irish, US, UK, and French Aviation Authority approval for his workshops to cover Rolls Royce and Pratt & Whitney turbine engines. Based on this, he established the team that set up Airmotive Ireland on the Naas Road, which included a jet engine test cell. These facilities marketed Irish engineering skills around the world to North America, the UK, the Continent, the Middle East and Africa. Airmotive specialised in providing expertise to airlines from emerging African states, securing overhaul and repair contracts for aircraft and components, engine overhaul, and training their personnel in Dublin.

In many ways, Bill Ward’s career was symbolic of the industrial development of Ireland in the last half of the 20th century.

Bill died on December 24th, and is survived by his children Cathryne, Peter, John, Phillip and Helen. He was predeceased by his wife of 73 years Marcella, and son Richard.

Six tips to make the most of your garden space
10