Hilary Fannin: I’ve been going to the gym for two weeks now. It feels like centuries 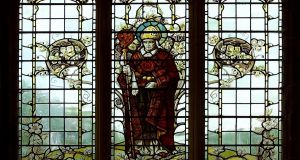 And so, friends, today we celebrate St David’s Day.

St David is the patron saint of Wales and not to be confused with Diana, the late princess of Wales, who was probably a lot taller and certainly wore much more sparkly dresses.

Based on my extensive research, I can say with my hand on my racing heart (I’ve just done 15 minutes on a cross-trainer) that St David was a man before his time, a man noted for his extreme asceticism and self-discipline.

David and his mates, who were all monks, drank neither wine nor beer, only water and isotonics, while also putting in a full day of heavy manual labour and intense Pilates (sorry, I mean study).

St David died in AD 589, which was, like, way way before decimalisation and even way wayer before the internet of things.

In fact, if you’d bumped into St David while he was pumping iron on a craggy precipice overlooking Colwyn Bay and told him you could fire up your rads at the touch of a button on your elegant tablet, he’d have had you purged and lashed and drawn and quartered, and that would be before you were sent out to gather a bale of leeks and a tincture of lemon grass for the monastery supper.

Life in the sixth century was damn hard, and keeping fit and toned, with abs of steel, was not easy. Hell, was there even any steel to steel your abs with? And when were barbells invented? And where could you possibly find a decent spinning class? And how were you supposed to get there anyway? Mule?

Bod of a god

These issues didn’t stop St David from having a body to die for, no siree. St David wasn’t just endowed with substantial qualities of spiritual leadership; that man was ripped. Of course he was.

He was out there, day after drizzling day, felling oaks and pruning daffodils and chasing dragons off the drying pig vellum.

He was labouring away, uncomplainingly, under a great Welsh sky that was as bruised and purple as the hairless thigh of a tighthead prop.

Wake up with determination. Go to bed with satisfaction

Take it from me, you wouldn’t find that man queuing up outside a karaoke bar in Llandudno, clutching his battered sausage and hoping to get his tonsils around a rousing Delilah. N

ope, it was straight back to his empty cell to down a couple of litres of H2O and catch up on the latest spiritual tomes before blowing out his candle and practising a bit of monastic piety.

Staunch, that’s what old St David was, staunch and resilient and sometimes downright badass. Old Dave was not one to throw in the sweaty towel after a minor scuffle with the lat pulldown machine.

You wouldn’t see him weeping over his adjustable pulley or banging his head off his gym mat or running away from his kettlebells class to go home and lie on the kitchen floor in a state of mild shock.

“Wake up with determination. Go to bed with satisfaction.” That could well have been Dave’s motto. Maybe he had it inscribed in wild boar blood over the head of his chilly cot.

Day after day, imagine it, all those clean-living, God-fearing 4ft monks, their tonsures aglow, hitching up their cassocks to do 16 Russian twists and 12 sit-ups before flipping over in their frocks and holding an abdomen-shredding plank position for one whole and entire minute.

And then repeating the entire shagging carnival three more times!

“How are you getting on?” the nice man behind the reception desk asked me when I was leaving the gym this morning.

I tried to remember why I was doing this to myself

“This is your second week at the gym, am I right?”

“Yes. I’ve been coming here for two weeks now. It feels like centuries.”

“Keep it up,” he said. “Maybe add a fourth day to your routine. Get some stretches in.”

“A fourth day? Stretches? That’s a fantastic idea. Sweet. Why didn’t I think of that?”

Later, poleaxed on the kitchen floor, I tried to remember why I was doing this to myself.

It had something to do with longevity. Or maybe I’d had a saintly vision in the dark of night of St David and his barbells and his irrepressible hwyl.