Jennifer O’Connell: Are selfies a form of self-harm?

She is 11 years old, this selfie-taking, quietly self-loathing little girl, schooled in insecurity 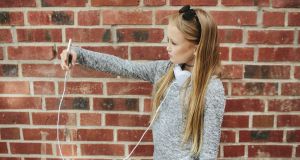 They’re everywhere, little girls like the one I know: clicking and deleting and filtering and smoothing and stretching and whitening and polishing and schooling themselves in the art of insecurity

She has big eyes, a wide, impish grin and long, glossy hair. Some day, she will look back and wonder when life came along to lay waste to those peachy cheeks and buttery forehead. That’s not how she sees it now though. She thinks her face is “fat” and “babyish”, so sometimes, before she uploads a selfie to social media, she runs it through an app and expertly makes her chin narrower, cheekbones more defined, eyes bigger and skin smoother.

She is 11 years old, this selfie-taking, quietly self-loathing little girl.

They’re everywhere, little girls like the one I know: clicking and deleting and filtering and smoothing and stretching and whitening and polishing and schooling themselves in the art of insecurity. Boys are at it too. By 11 or 12, sometimes even younger, they’ve absorbed the message that their image is a commodity to be measured, and found wanting and improved upon; that self-worth is measured in a currency of likes and shares.

At that age, I can’t remember being more than vaguely aware of other people’s perceptions of me, beyond checking occasionally whether there was cereal in my teeth or if my scrunchie was still in situ. It was at least a couple more years before I’d learn to look in a mirror and critically assess my appearance, the gap between my front teeth that I hated, the hairy legs I kept hidden under dark tights even in summer, the shadows under my eyes, and the pimples that still blight me, nearly 30 years later.

But other than shaving my legs, and applying some Clearasil concealer to disguise the pimples – which, as an ex-boyfriend devastatingly pointed out, merely lent them a fluorescent hue that was visible from space – there wasn’t much I could do about it. So I gave up, and got on with worrying about how to make Rob Lowe fall in love with me.

I found some old debs photos recently. At 17, I was never one of those high-school girls with clear-skinned smiles who were the enemy of Janis Ian, so I was able to look at them entirely free of nostalgia on that score. My first thought was to wonder who the hell let us out like that: with hair in its natural state of unholy frizz, eyebrows plucked until they resembled baby newts, dressed in a hotchpotch of vaguely ill-fitting dresses borrowed from sisters or rented for the night.

But there was something compelling about the images too, and it wasn’t just the memory of the summer air filled with the heady cocktail of Lynx and expectation. It took a minute for me to identify it: with our hair which had never met a GHD, fake-tan-free skin, lashes in their primitive state of stub, Egyptian Wonder daubed inexpertly across cheekbones, nobody could have called us sophisticated. But nobody would have said we all looked the same, either. We were mostly a mess, but a lovely, imperfect, idiosyncratic mess.

I know I risk sounding like the old dear yelling at the youngsters to get off her lawn – and this isn’t about shaming young people, who are growing up in the attention economy we created and signed them up to. But there is a depressing and punishing homogeneity to what passes for beauty in today’s selfie-ready world. You don’t even need to be on social media to see it. Look at any group of young women and count how many with short hair you see. Or pale, freckly skin? How many can you see who look absolutely nothing like a Kardashian?

The British photographer and Dazed magazine founder John Rankin wanted to explore what selfie culture, and its rigid notions of beauty, are doing to the self-esteem of young people, so he took portraits of 14 boys and girls aged between 13 and 19. He gave the images to the teenagers and told them to edit them until they were “selfie ready”. The before photos are extraordinary: the models are beautiful by any measure, but there is a rawness and vulnerability to their beauty.

The after photos are extraordinary too. In each image, the teenagers look around five years older. Noses have been narrowed, chins elongated, freckles edited away, skin smoothened until it resembles Teflon. Their own mothers probably wouldn’t recognise them in the street. “People are mimicking their idols, making their eyes bigger, their nose smaller and their skin brighter, and all for social media likes...It’s time to acknowledge the damaging effects that social media has on people’s self-image,” Rankin said on Instagram.

Rankin’s Selfie Harm project also says something about the chasm that has opened up between our digital selves and our true selves, and which one is valued more highly. When we buy into selfie culture, we’re no longer just individuals, but a brand to be reviewed by an invisible audience on the other side of a 4.7 inch screen.

The project isn’t entirely depressing: Rankin says in a footnote that the majority of the subjects ultimately preferred their unfiltered images. Some day we will all look back and wonder why we were so willing to buy into this culture of collective self-harm.