Michael Harding: No wonder the graveyards are full of young men 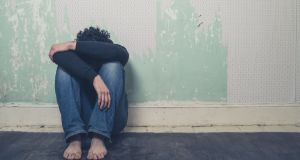 A man told me his nephew had just been buried. I listened. I didn’t say anything, because there is a grief that words cannot soften, and a pain that no story can cure.

I thought my heart was a mythic thing; a beating metaphor of love. I didn’t realise it was flesh and blood. But I learned fast, when I had a coronary attack.

So I ended up on The Ray D’Arcy Show, telling the full story, and having a good laugh by insulating the terrible event inside the story.

Stories insulate us from trauma. When something terrible happens, it’s unpleasant. But later, when we shape a story around the event, we can laugh. As Garcia Marquez said, “We relish life more in the remembrance, than in the actual experience.”

The morning after Ray D’Arcy I was reluctant to go home to a rainy day in Leitrim because the weather in Dublin was good. So before I checked out of the hotel I dallied in the foyer, sipping coffee.

A young man at another sofa was talking to himself, his eyes almost popping out of his head and no phone in his ear that might make sense of his distressed monologue.

According to gossip, there were Russian scientists working in the old Arigna power station, who had come from nuclear facilities in the Soviet Union

I concluded that young people in Dublin are just as distressed as they are in Leitrim. And in Leitrim they are definitely distressed.

Last week I met a man in a black suit returning from a funeral.

“We were burying the nephew,” he said.

“What happened?” I wondered.

“He went into the shed one night,” the man declared. I nodded because we all know what can happen to a young man, alone in a shed.

“He texted his friends,” the man said, “and told them to bring the guards. But he was dead when they got there. He must have regretted it at the last moment.”

I listened. I didn’t say anything, because there is a grief that words cannot soften, and a pain that no story can cure.

“There’s too much rain and forestry in Leitrim,” he said as we parted. “No wonder the graveyards are full of young men.”

That evening I got an email from my two friends in the monastery in Belarus, to say that they were coming to Ireland again. They’re not real nuns. They’re just young volunteers and they drive around Ireland regularly, selling icons from the back of a van.

They make me nostalgic for the old days, when church doors were always open, and nobody had yet imagined what sexual depravities were going on behind the closed doors of the parochial houses.

I love to see them come, in their red battered van, up the hill, like a travelling grocery shop. And they bring me exotic stories about monastic life in Belarus, and their battered van of icons is a symbol of absurd hope in a secular world.

In the old days there was a travelling shop that traversed all of west Cavan.

An old Bedford van, carrying provisions up lonely laneways on the slopes of Cuilce mountain, to elderly people who didn’t get to town very often, or German hippies who had no car, and lived in derelict cottages and reared their babies without disposable nappies, even though the travelling shop always had a few packets of pampers hidden discreetly under the washing powders.

We weren’t familiar with strangers back then. So we would weave a story around them. For example, people said one of the German women on the mountain was so strong that she could carry bags of coal from Swanlinbar on her back.

And according to gossip, there were Russian scientists working in the old Arigna power station, who had come from nuclear facilities in the Soviet Union. There was no end of stories that kept us warm in winter.

But I never actually met the Russians, and I never saw any German woman walking with coal on her back. No more than I ever met Shergar in Ballinamore.

So maybe they were all just stories we told ourselves in the deep mid-winter, as a protection from despondency, or death in a cowshed.

Maybe that’s why I like to see the sisters come from Belarus. It’s not just the holy icons that cheer me, or the fact that their van reminds me of a travelling shop in west Cavan long ago.

It’s their stories that I love.

And I could sit for hours listening to them recount tales of love and death, and everyday saints in a far away monastery covered in snow.

The truth is not the issue. But the way they tell it gladdens my heart.