Sean Moncrieff: I don’t care how much politicians are paid, and neither should you

If we paid them more, or paid them less, would that make a difference? 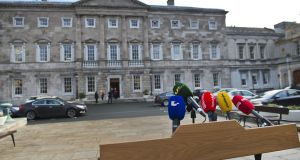 Dáil Éireann: Once you’re inside you’ll notice how the building is set far back from the road. The outside world, full of voters, seems miles away. Photograph: Brenda Fitzsimons

It sparks annoyance for a range of reasons. At the more facile end is the idea that politicians have entered elected office solely for the money.

Being a politician isn’t easy. The hours are long. the pressure is constant, you get dogs abuse and you can be fired every five years. There are easier ways to make money.

Doubtless, if you asked a politician why they do what they do, they’d give you a dewy-eyed spiel about public service. In more unguarded moments they might admit that there is something addictive about the business.

It is the most vivid of reality television shows where – unlike most reality television – the stakes are genuinely high. The reality is probably a stew of motives: the buzz, personal ambition, ego and the desire to do some good. People are complicated.

So if we paid them more, or paid them less, would that make a difference?

Pretty much every country in the developed world has this ongoing debate. Pay them too much and they become out of touch. Pay them too little and they can be vulnerable to corruption, or have to be so rich in the first place that they don’t need the money; and you get out-of-touch people again. People might not enter politics for the money, but the lack of it might put some off.

Irish politicians aren’t paid spectacularly well when compared with other European countries – Italy is where the big bucks are.

Ireland sits in the middle of the pay-a-politician table. But that’s just based on wages. Take into account the nice juicy pensions, and according to one calculation, almost half of the TDs in Leinster House are millionaires.

Privately, they might argue that they need a pension because politics is such an uncertain business. But former TDs are eminently employable: they routinely fall into directorships or lobbying firms. You’re never going to meet an ex-deputy on the dole queue.

Then there’s the significant number of Irish politicians with land, farms, multiple properties, directorships, pubs and shares. Every year TDs have to declare their interests, but the rules on share ownership are, to put it mildly, far from rigorous. Yet some voters might approve of this wealth acquisition, regard it as evidence of gumption and a can-do attitude.

Does any of that matter? Does being well paid destroy empathy?

A millionaire TD, if they do their job properly, can still have plenty of insight into what it’s like to be poor. Nor does being well paid necessarily make you lazy or corrupt. You might favour low taxes for the rich and regard everyone on the dole as a sponger. But that’s not corruption. That’s just being a Blueshirt.

Okay, I’ll say it: I don’t care how much politicians are paid. Even if they were paid a million a year each it would make little difference to national budget. What I care about is how they do their job. Can they deliver a children’s hospital? Can they manage Brexit? Can they come up with a solution to homelessness?

What seems to disassociate politicians from the rest of us isn’t money. It’s power. It’s the considerable self-regard that brings a person to run for elected office, further bolstered by actually being elected: by spending one’s days inside the panelled corridors with all the other cool kids.

Because it is lovely in there. Once you’re inside you’ll notice how the building is set far back from the road. The outside world, full of voters, seems miles away.

Perhaps the answer isn’t pay, but transparency. Stick them in a glass box where we can watch them, and they’ll see us. Every minute of the day.

What can you buy for €275k in Portugal, Spain, France, Greece, and north Co Dublin?
Real news has value SUBSCRIBE