He wasn’t violent or a useless sponger. He was something much worse. He was English

Jennifer O'Connell: My friend’s father told her not to come home until she ditched her boyfriend. He wasn’t an addict – he was English 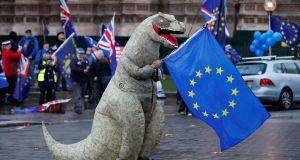 A demonstrator, dressed as a dinosaur, waves a European Union flag during a protest outside of the Houses of Parliament in central London last November. Photograph: Tolga Akmen/AFP/Getty Images

A girl I knew years ago went away to college, and fell in love with someone terribly unsuitable. Whenever she came home for the weekend, and her parents asked if there was “anyone special”, she would just shrug enigmatically.

“Any boys?” they’d try, and she’d respond with a small, sad smile. They told each other that whatever was behind that tight little smile was just a phase. It was not a phase.

Small towns being small towns, word eventually got back. There were tears and disbelief. The harshest of words were exchanged. Her father told her not to bother coming home until she got sense.

He wasn’t a drug dealer, this guy. He wasn’t violent or an addict or a useless sponger. He was something much worse. He was English.

In the 20 or so years since my friend broke her father’s heart by falling for an Englishman, Irish society has thankfully grown up. We’ve had the Good Friday agreement. We’ve had the Queen’s “A Úachtaráin agus a chairde”. We’ve had Graham Norton, Dermot O’Leary, Sharon Horgan, Dara Ó Briain and Aisling Bea championing a version of the emigrant story that doesn’t involve a single “No dogs, no Irish” sign. We’ve had the centenary of 1916, which we managed to get through without lapsing into an orgy of tearful renditions of A Nation Once Again. Last I heard, my friend’s father couldn’t do enough for his clatter of half-English grandchildren. We’ve grown up.

Fair enough, we’ll probably keep the outrage klaxons on standby for those times someone describes Saoirse Ronan as British, or refers to England as “the mainland”. But for the most part, we have proven ourselves capable of behaving like a mature nation whose shoulders are free of postcolonial chips.

Or so it seemed, until Brexit came along and revealed that our 800-year-old inferiority complex hasn’t gone away, you know.

Brexit has the potential to be Ireland’s economic catastrophe as much as it does Britain’s national humiliation – not that you’d think so from the way we go on about it here. For all the earnest Brexit breakfasts and the sober political analysis, what most people really want to know is what stupid thing has just been said by which stupid Brexiteer. We’ve become a nation of umbrage-peddlers, mining media interviews and tweets by UK politicians for fresh opportunities for outrage. All the while, we’re revelling in British apoplexy at the notion that the EU is being pushed around by Ireland, and is pushing Britain around in turn. Far from stepping up to claim its “rightful place”, Brexit has seen Britain’s self-image as a major world player systematically eroded and, let’s be honest, we can’t get enough of it. British politics is imploding, and we couldn’t be more pleased.

To be fair, it’s not purely schadenfreude. If Brexit has achieved anything, it has been to open Irish eyes to the extent of English ignorance about the complexities of our shared history. And it is not a pretty sight.

When I was in England earlier this year, I had several conversations in which it became clear that the person I was speaking to had no idea the Republic of Ireland was a separate country. They didn’t mean any malice. They just didn’t know “Ireland” was a thing.

“Why are southern Ireland stopping in the EU? Why are they not going with England?” asked a taxi driver, who was confused about the backstop issue. When I explained that southern Ireland was in fact the Republic of Ireland, an entirely separate country, he was equal parts astonished and delighted. “Now I get it,” he said, like a man who had just discovered penicillin. “I just thought we’re all coming out – what difference does it make?”

A truck driver in Hull port stopped short of patting me on the head as he reassured me that I shouldn’t worry about the implications of Brexit for Ireland. “Nowt will change in Ireland. The British soldiers will still be there.” Another man outside the job centre was confident he could explain the Irish backstop issue. It was about “the IRA bombing McDonald’s and places because they wanted independence, and now they’re getting independence, they say they don’t want it” – an analysis so rich with wrongheadedness, I was too tired to begin unpick it.

Wait. Put down the outrage klaxons. We don’t have to look too far to find another example of one larger close neighbour mired in ignorance about the political and social realities of life in the other. Just find a mirror and start reciting all your absolute certainties about Northern Ireland into it.

British obliviousness about our shared past, messy present, and interdependent future is frustrating and depressing and occasionally enraging. But the barely disguised Brexit glee on display at times here is just as unedifying.

We saw during the Repeal referendum that it is only when we’re prepared to stop nursing old wounds that we can heal. As any good divorce lawyer – or my friend’s father – would tell you, finding common ground means letting go of your oversensitivities, reining in your capacity for offence, and dialling back the schadenfreude, however delicious.

What will €250 buy in Dublin 7 and Co Clare?
Real news has value SUBSCRIBE