No one warns you as you leave Holles Street, ‘kids can be seriously focking annoying’

Honor goes, ‘The only reason I’m ringing is because there’s a Gorda checkpoint ahead’ 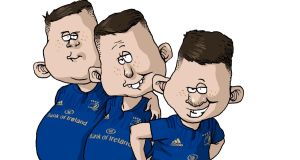 ‘Brian, Johnny and Leo’s effing and blinding will wake the creatures of Whistleberry Forest long before anyone gets to play a note’

Kids are annoying. We probably don’t say that enough. They certainly should give you the heads-up at the hospital when you’re bringing them home for the very first time. I mean, when you buy a microwave oven, the instructions warn you – in all seriousness – that it’s not a good idea to dry your family pets in the thing! When you buy shares, they tell you that – no shit! – they can actually go down as well as up in value! But no one pulls you aside as you’re walking out of Holles Street with your little bundle of joy and goes, “Just to warn you, they can be seriously focking annoying.”

But they can. I’m calling it. And midterm is when they’re at their annoying worst.

Sorcha is always a lot more upbeat about school holidays than I am? On Monday morning, for instance, she was all, “Oh my God, Róisín Ingle had a piece in The Irish Times at the weekend, suggesting loads of things to do to keep your kids entertained for the week!”

I was like, “I’m not sure if those things are meant to be taken literally, Sorcha.”

“It’s like those ‘Ten ways to a healthier you’ features. I think you’re supposed to just read them and think, ‘I’d love to do stuff like that – if I could only be orsed.’ ”

“Oh my God, Ross, listen to this! ‘At Glór Ennis the creatures of Whistleberry Forest are confused! Spring has arrived early and Huggy the Hedgehog must embark on a musical adventure to wake up the rest of the creatures in the forest! Suitable for children aged three to five accompanied by an adult!’ ”

I was like, “Yeah, have you met our children, Sorcha?”

“I’m saying that Brian, Johnny and Leo’s effing and blinding will wake the creatures of Whistleberry Forest long before anyone gets to play a note. Plus, it’s in Ennis.”

“I’m not going to dignify that question with a response. All I will say is that as long as they’re holding Joey Corbery down there against his will, I won’t be contributing anything to the local economy. End of conversation.”

So just to prove a point to me, Sorcha decided to bring them down there anyway – we’re talking Honor and her three brothers. She arrived home that night looking like a woman who’d been rescued from a capsized boat after living on toothpaste and rainwater for 30 days and nights. From this alone, I gathered that some bad shit had gone down in Whistleberry Forest. All Sorcha would say, before she took to the bed, was, “I think we should take it in turns to do the things on that list. You can bring them out tomorrow.”

So she pointed at the paper – just before she lost consciousness. I picked it up and saw that she’d put a big, angry asterisk beside the following item: “Watch out for dinosaurs when you visit temporary exhibition Jurassic Skies, and meet with scientists, artists and storytellers to discover more about when these creatures took to the air! You’ll get to inspect dinosaur fossils, bird feathers and bones! Museum of Decorative Arts and History, Collins Barracks, Dublin 7.”

I get a sudden flashback to my school days, when Mrs Culhane, our first-year science teacher, took us to the Natural History Museum to see some dinosaur bones against the express orders of Fr Denis Fehily, the school principal, who didn’t agree with that kind of thing. She ended up being sacked while Fehily called an assembly to assure us that God planted the bones on Upper Merrion Street just to test our faith in the Old Testament, of which he was a major fan.

The following morning, Honor helped me put the boys into the cor. I storted the engine and went, “Okay, who wants to go and see a load of, allegedly, dinosaur bones?” and there was, like, silence in the back. Then I went, “And who wants to go to Dundrum Town Centre?”

I know it’s accepted that I’m the cool parent but there were actual cheers in the cor.

So Dundrum it ended up being. Honor went off shopping while me and the boys did all the usual fun stuff. First, I filled their little bellies with weirdly coloured ice cream, then we went outside, stood on the little bridge and they vomited it back up into the fountain. Then we played this game where we all pulled up our hoods and tried to sneak into McDonald’s, the Build a Bear Workshop and other establishments that have put us on their banned lists.

It ended up being an all right day until Honor rang me in the middle of the afternoon and went, “Dad, do you remember at Christmas, you told me not to be driving your cor any more?”

I reached for my pocket and my body turned instantly cold. She took my keys! I was like, “Honor, where the fock are you?”

“Ranelagh, ” she went. “Not that it’s relevant. The only reason I’m ringing you is because there’s, like, a Gorda checkpoint ahead – wasn’t there something on the news about how they’re, like, impounding cors if the driver doesn’t have a full licence?”

So there I was, standing outside the craft butchers, trying to come up with a plan, while Brian, Johnny and Leo dragged a fibreglass golden Labrador full of money intended for the blind towards the escalators, then tried to lift it over the gord rail.

Honor was like, “You mean just leave in the middle of Ranelagh?”

“Yeah, no, I’ll report it stolen. Just get a MyTaxi back here, will you?”

And that’s when I heard the most humungous crash – the sound of a fibreglass dog full of money exploding into a million pieces three floors below us. The boys raced off down the escalators to fill their little pockets. And as I raced after them, all I could think was, I have no idea how much money they pay teachers in this country – but I do know that it’s not nearly enough.