New to the Parish: Mohammed Mrabat arrived from Morocco in 2003 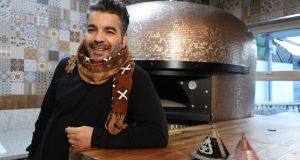 Mohammed (Mo) Mrabat has dedicated his life to cooking. Brought up in a Berber-speaking household in the Moroccan city of Fez, Mrabat’s interest in food started at an early age, stemming from a love for the fusion dishes produced in his home country.

“In Morocco we have a real diversity of food. Our deep connection with African countries, the Middle East and India makes our food unique. I decided to give my heart to it, I said this is what I want from my future.”

After completing university studies in law, philosophy and psychology, Mrabat spent two years training as a chef for five star restaurants and found work at the famous Villa Mandarine hotel.

Moving abroad didn’t cross his mind back then, he was happy in Morocco. Yet, nearly two decades on, he is speaking to me from a small, south Dublin coffee shop.

When I contacted him about an interview, Mrabat explained he was in the middle of “big changes” to his business “to adapt with the pandemic situation”. “Funnily enough, today is the 17th anniversary of when I came to Ireland,” he adds in his email.

Mrabat arrived here in November 2003 after applying for jobs in Marseille, Vancouver and Naas to gain more experience abroad. His brother, who already lived in Ireland, recommended he try some Irish hotels.

“I decided whoever offered me a job first I’d go with it. To be honest I’d never thought I’d live somewhere else. But if you really want to go abroad, you need a language, you need to be ready to adapt and you need to have a job. Those three criteria were always in my mind.”

Mrabat packed his bags after a four star hotel in Naas, Co Kildare offered him a job and a work permit. Despite having applied to work as a chef, Mrabat spent his first three months as a barman. The pay was also “one of the lowest salaries ever, even in that time of the Celtic Tiger”, he says. “I wasn’t happy with the whole thing and showed them I was trained to work in fine dining so they moved me to the kitchen.”

After two years in the job, Mrabat paid nearly €3,500 for a week of training with the internationally renowned French chef Alain Ducasse in Paris. “It’s something I’d wanted to do since I started cooking. I was actually the first Moroccan guy to do his training. I learned everything from that experience. He showed me how to cook with the heart.”

Following the French training, Mrabat left his job in Naas and starting working for a new hotel in Athy, Co Kildare. From there he moved to work for a hotel in south Dublin.

“I never planned my life, I always just try and go with the flow. It builds up your personality and helps you deal with whatever comes your way.”

I was the first non-Irish person to run that place and I got that look at the start of ‘who the hell are you?’

In December 2008, when the Irish economy crashed, Mrabat was laid off but eventually secured work as a chef in Dublin’s Royal College of Physicians. “It was the best job, you have all these VIPs and feel like you’re working in a really prestigious place.”

Mrabat went on to work for a small Dublin restaurant and was then contacted by the Moroccan ambassador to be his private chef. “I met all the figures passing through, from Bono to Michael D Higgins. It was a unique feeling, it felt like I was doing something for my country while abroad.”

In 2013, Mrabat received a call from a friend asking if he would consider taking over a coffee shop in Donnybrook in south Dublin. He agreed and spent the following four months both managing the café and working for the ambassador before moving full-time into his new business.

Convincing local customers to keep coming despite the change in ownership was difficult at first, he admits. “I was the first non-Irish person to run that place and I got that look at the start of ‘who the hell are you?’. In any society people have to trust you and it takes time to build relationships. But I showed people I wasn’t just running a coffee shop, it was a place for people who want a chat, need help or need a place to leave their keys. If someone was in a bad mood they came here where there was laughing and joking.”

Online reviews of Café Diem reveal it wasn’t just the warm atmosphere which interested patrons. The “unbeatable coffee”, the “tasty scones” and “best tagine outside of Morocco” started bringing customers from around the city to visit the small café hidden behind the petrol station on the Donnybrook road.

Sadly, like most small businesses, Café Diem has struggled during the pandemic. It reopened for the summer but Mrabat barely earned enough to make ends meet. Aside from covering rent for the café and his apartment, Mrabat also helps his parents financially and pays for their medication in Morocco.

In late summer, he decided the business needed to change direction in order to survive. He took out a loan, ordered a large pizza oven from Poland and started refurbishments on the building. “I’d been working for free for eight months and realised it was time for a better balance. It was something that had been in my mind for a long time. I try to always see the positive in things and felt up to the challenge.”

Mrabat originally planned to open Mo’s Pizzas in the evenings but realised he risked losing some regular customers and so will continue to serve coffee and scones in the morning followed by pizzas from the afternoon.

Mrabat admits he and his Polish wife Joanna who he met and married in Ireland in 2012, feel daunted by the amount of work left to do on the café before it reopens. “We’ve set a realistic goal and plan to welcome customers from January 2021. It’s better to take our time, do it right and keep the standard high.”

An Irish citizen since 2013, Mrabat wants to see his small business survive into the longterm. “Morocco is in my heart but Ireland is always in my mind. People here trust me. I’m not just looking for a business, it’s a relationship. I think it comes from my family, we were always very hospitable. I get the big heart from my parents.”