New to the Parish: Roxana Zaha arrived from Romania in 2016 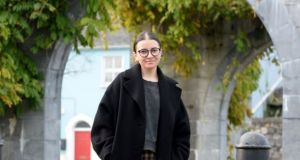 Roxana Zaha: “I felt my job was not only to translate words, I had to learn how to translate cultures.” Photograph: Alan Betson / The Irish Times

Before moving to Ireland, Roxana Zaha was not accustomed to eating mass-produced food. Growing up in the Romanian town of Hateg in Transylvania, she was surrounded by women who cooked daily meals using fruit and vegetables from their gardens and meat from local farms.

“I come from a family that was quite self-sufficient. The majority of our cheese and meat came from our home. If we wanted to cook chicken for dinner, we’d grab a chicken from the coop. If we wanted aubergine, we’d grab that from the garden.

“We had a huge pantry and everything in it was made by us. But when I came here it was a cultural shock. In Tesco I’d just keep looking at the meat fridge and it creeped me out, I didn’t know where that meat came from.”

Zaha’s appreciation for preparing food from scratch also stemmed from the time she spent with her grandparents in a small village near her hometown. “I didn’t have helicopter parenting; I was able to go out and explore. If I was hungry at noon and smelled cooking in the village, I’d just go into their yard and eat with them. It was a very free childhood. I was sort of raised by the village.”

Zaha developed a passion for writing during her teen years but chose to follow in her parents’ footsteps and study chemical engineering, a decision she soon regretted.

“I had no idea you could do creative things for a living. No one around me had creative jobs, they were only for hobbies. But I found the environment in university very harsh and didn’t like it. Eventually I told my parents I wanted to write and they supported my decision to study journalism.”

Unlike most other Romanians who come here because they have a brother or a cousin in Ireland who knows where to find work, I had no plan

After completing her studies, Zaha worked as a reporter with a couple of Romanian television stations. However, she found the snapshot reports she was asked to put together unfulfilling and frustrating. “It felt really superficial. I had to squeeze a person’s life into 30 seconds. I always went home feeling I’d done people an injustice. They trusted me to tell their story but what I was doing didn’t represent their lives.”

When Zaha decided to quit her job, her boyfriend, who works in computer science, suggested they try living abroad for a while. With offices in Dublin and London, he was able to request a transfer from the city of Cluj to western Europe. The couple packed their bags and arrived in Dublin in May 2016.

“Unlike most other Romanians who come here because they have a brother or a cousin in Ireland who knows where to find work, I had no plan,” says Zaha. “The first few months were hard, I didn’t have any structure and didn’t know what to do next.”

The couple lived in an apartment in Rathmines, a place Zaha says “looked like a postcard”.

“Rathmines was very pretty but I was a bit depressed at that time. I spent a lot of time inside, my memories of that period feel very vague now.”

Sometimes she walked to the Polish supermarket on the Rathmines Road just to breathe in the familiar aromas and momentarily feel like she was back home. “I’d buy things there because it smelled just like a Romanian convenience store.”

After four months in Dublin, Zaha found a job as an interpreter, working with Romanians and members of the Roma community in hospitals, courts and Garda stations.

“It was a transformative experience. In Romania I come from quite a privileged class in the sense that my parents were educated and we were always quite comfortable financially. In Romania I was never made to feel inferior. Yet, as a translator, I was made to feel less than anyone else in the room. But gradually it gave me a lot of freedom. I was the fly on the wall, people felt no restrictions in my presence and would speak openly about their suffering and sorrows.”

Zaha also started to recognise the unconscious racism she had learned back home towards Roma people. “I got to know them through my job and befriended them in my private life. I was seeing my own culture differently but also learning about Irish culture; it was fascinating. I felt my job was not only to translate words, I had to learn how to translate cultures.”

While Roma people do face discrimination in Ireland, Zaha believes the racism in Romania is far worse. “Ireland is much better for them. Yes, they face daily racism on the streets but the institutions I dealt with were always very professional. I never felt they were mistreated or discriminated against.”

Zaha’s work forced her to spend many hours commuting around Dublin which she spent reading English-language books to perfect her linguistic skills. Wanting to learn more about the migrant experience in Ireland, she applied to study a degree in anthropology at Maynooth University.

“When you’re an immigrant and then also a woman immigrant your confidence is often low and so I never felt I’d be accepted onto the course. I believed it was for people smarter than me. But I got a place, it was an amazing experience.”

Zaha, who now lives in Maynooth, is in the final year of her degree and is working on a thesis about material and food culture. She spent the past summer doing field work in Romania while staying in the B&B her parents now run.

She and her husband regularly receive food deliveries from home through a dedicated bus service that travels between Romania and Ireland, carrying goods for people who have settled here. Sometimes they collect the jars of pickled vegetables and canned fruits prepared in Zaha’s village from a designated spot on Mountjoy Square and other times they travel to a warehouse in Blanchardstown.

“I wanted to know more about the culture of food and why people spend so much time and energy on it. I want to understand those values. I also think it will help me make sense of my own life and upbringing.”

Once she finishes her studies, Zaha is considering moving to London to study for a master’s. While she initially felt like the move to Ireland “shattered” her sense of identity, Zaha says the time she’s spent in this country has helped her develop a new version of herself.

“I’ve learned to be more positive here. Even my sister and parents tell me I’ve changed, that I seem more light-hearted and I think that’s because of the Irish attitude towards life.”