New to the Parish: Jocelino Jorge arrived from Australia in 2018 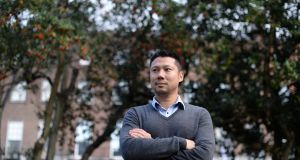 When Jocelino Jorge moved to Australia aged seven he didn’t speak a word of English. Now, 25 years on, he still clearly remembers sitting in his new classroom in Sydney and feeling like the odd one out.

“It was difficult, but kids are resilient. I remember the principal gave me a guided tour of the school, she made sure the other kids knew who I was. She was instrumental in making my assimilation into school a good experience. The teachers worked really hard too to incorporate me into the group.

“You read a lot about racism in Australia, but for me it was a very welcoming country. Of course racism exists, but that was never the Australia I knew.”

Jorge was born and brought up in Macau, a Portuguese colony until 1999, when it became a special administrative region of China. His father was the chief of Macau’s fire department while his mother worked in banking until she gave up her career to care for her children.

The region’s evolution into the “gambling capital of the world” in recent decades has both positively and negatively affected the lives of locals, says Jorge.

“From a good point of view there is hardly any unemployment and little to no homelessness. But then you get the corruption of gambling and young people have less of a desire to seek higher education because you can earn so much from dealing cards in casinos. Now, with Covid, a lot of casinos have stopped operating and people who gave up the opportunity to go to university are unemployed.”

Jorge left Macau with his mother and sister in 1995 and his father followed four years later after the handover to China. Shortly afterwards, his parents were divorced.

“I was essentially brought up by a single mother in Australia. She gave everything for us; she worked her butt off. My early memories are we did struggle financially. My parents wanted us to go to private school to get us a quality education; it wasn’t easy.”

After the divorce, his mother went back to work full time in the local post office, a job she still holds today. “My mum paved the way for us, we are so lucky to have her.”

A sporty child, Jorge developed a love of tennis and dreamed of playing professionally. These hopes were dashed by an injury in his teens and so the young sports fan became a tennis umpire. He studied business and sports management after school and travelled the world as an umpire with the International Tennis Federation (ITF). “In a way that part of my life went by really quickly. I was just 21 and I was umpiring internationally.”

After graduation Jorge moved to London for five years to work with the ITF but then decided to move back to Sydney and started working in fundraising for the not-for-profit sector. “I had a crazy five years and spent a lot of it travelling the world as an umpire. But I missed home and wanted to rekindle relationships with my friends. I loved it when I got back. I could see family a lot more and also met the man who would bring me back to this side of the world.”

Jorge’s relationship with his now-husband Paul became serious quite quickly and the couple visited Ireland a few times before finally making the move here in 2018. He found work in charity fundraising and joined Dublin’s Lansdowne tennis club straight away. “I was able to assimilate into Irish culture relatively easily and that was largely due to tennis. I became very social in the club and the members accepted me for who I am. I’m also quite easy-going and that really helped me slot into the community.”

In January 2019, Jorge was appointed head of fundraising and marketing with the Irish Red Cross. While initially he considered Dublin a multicultural city, on closer inspection he realised most of this diversity was confined to the tech community.

“The one thing I loved about Dublin was the diverse workforce, but when you strip out all the tech you get a very homogenous working group. Particularly the higher up you go the more homogeneous it gets and I think that’s something that needs to be highlighted. A more diverse workforce stimulates different thinking and allows you to make better decisions. But I think a lot of people who look like me make career choices based on how they’re perceived by others and that’s a problem.”

Jorge followed with interest the appointment of the Green Party’s Hazel Chu as Lord Mayor of Dublin earlier this year. “I was very interested to see if an Asian-looking person would get elected in Dublin. I think people like Hazel make it easier for the rest of us to hold those kinds of positions. I would like to see more people who look like me in senior or board positions.

“The globe is slowly moving to that ideal scenario – more diversity across the whole economy. I would love to see that happen in my lifetime and I think Ireland is on the right path.”

Jorge and his husband were married just days before the country went into Covid-19 lockdown last March, which meant many friends and family were unable to travel for the celebration. The couple hope to celebrate again in Sydney once the pandemic has passed.

Working with the Red Cross during a global pandemic has been “a huge honour”, says Jorge. “What I’ve learned over the past 10 months is we do fantastic work both domestically and internationally. We went into Irish communities to provide essential services and internationally, we bound together on issues in places like Lebanon.”

Jorge speaks to his mum every week but is very happy living in Ireland. “I definitely fit into Irish culture and love going out and having a good time with people. People here are friendly and I love the ‘craic’, which is a word I have stored in my vocabulary for life.”