‘Ireland is a really good country for Muslims’

New to the Parish: Arjumand Younus and Atif Qureshi arrived from Pakistan in 2011 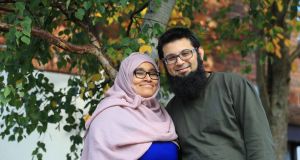 Atif Qureshi had very little interest in studying as a child. The son of academics, there was an expectation that all members of the family would strive to excel in their area of study. However, it was only when tragedy struck, that Qureshi made the decision to apply himself at school.

Born and brought up in the city of Karachi in Pakistan, Qureshi was just 12-years-old when his father died of cancer.

“Before that I was all about sports and fun. I was the youngest, the naughty sibling. But when my dad died I realised I needed to get my act together. I could see my mum working hard to bring extra money into the house, it was the loss of my father that made me thinking about the importance of life.”

During his teens, Qureshi became interested in information technology and worked hard at school so he could study computer science at university.

In another part of his home city, a teenage girl was pursuing a similar dream. career path. Arjumand Younus’s family was more interested in business than education and did not consider higher education suitable for a young woman. However, Younus’s father, who had worked his way out of poverty to bring up a family, could see his daughter was gifted.

“I had two brothers but I was the nerdy one,” says Younus. “Maths was my favourite subject and my father thought: ‘This girl is special’. He used to sell ice-creams on the streets, he had no resources for education as a child. So when he saw I was studious he decided he could realise his educational dreams through me.”

Qureshi and Younous met during their first year studying computer science at university and started working on projects together. Coming from a background of arranged marriages, their families were initially uncomfortable when they announced their decision to marry.

Both families believed the students were too young for marriage and advised them to wait. However, the pair were eager to travel abroad to pursue a Masters degree and eventually convinced their families that getting married before moving made sense.

“We shared interests and viewpoints,” said Qureshi. “We think the same way,” adds Younous. “People were asking what’s wrong with these kids. But we wanted to be together.”

Once married, the couple moved to South Korea in 2009, where they had been accepted to study at the Korea Advanced Institute of Science and Technology, often considered the MIT of south Asia. Eight months after their arrival, Younus’s father suffered a stroke and was left paralysed. “It was very tough being away from my family at that point. I do feel focusing on my studies was something he wanted for me.”

The couple moved back to Pakistan in 2011 but quickly decided they wanted to continue their studies abroad. They felt universities in Asia were too controlling of their students’ research and sought more independence in their work.

They considered moving to France and also looked into options in English speaking places like the UK and Australia. The United States, they say, was not an option.

“Before 2001 a lot of Pakistanis would have opted for the US but we wanted to stay away because of the stories were heard,” says Qureshi. “After 2001, there was a lot more racism in the world. We’re not saying it would have been all bad in the US but we didn’t want to have to deal with trouble we didn’t need.”

“Somewhere along the line we discovered Ireland was independent from Britain. When we heard about the history of Ireland, we hoped people here would understand what it’s like to face racism and rejection.”

“And now, seeing the way the States are, I think we made the right decision,” adds Younus.

The couple contacted a number of professors in Galway and Dublin and secured scholarships to move to Ireland. They arrived in 2011, working on a joint supervision contract between the National University of Ireland Galway and a university in Milan.

“We thought Galway was beautiful but it was so rainy,” remembers Younus. “We couldn’t even cycle because of the rain. But we loved it in the summer.”

The couple found people in the western city to be open and welcoming. When they moved to Dublin in 2015, people were not as open, they say.

The couple now have two daughters and live beside the mosque in Clonskeagh where their older daughter attends school. Earlier this year, Qureshi was appointed as lecturer in data analytics at the Technological University Dublin while Younus is a research fellow at UCD.

The couple are happy in Ireland but find it frustrating that the years they spent on student visas do not count towards citizenship applications. They’ve also struggled to attend international academic conferences and present their work to European audiences because of visa issues.

In 2013, however, Younus was able to travel after being selected for a Google Women Techmakers scholarship. “I was among seven people that represented Ireland; I felt like I was doing something of use for the place where I’m living.”

Qureshi is keen to disprove the perception that immigrants do not contribute to the society where they’ve relocated. He is currently involved in a project contributing to the fight against Covid-19, work he hopes will help end the “stigma that Muslims don’t contribute positively”.

The couple say they’d like to see more Muslim schools in Ireland so children can mix with people of a similar background and feel accepted. “We want our daughters to have a safe space where they can relax but also learn that differences are ok. It’s about letting our children know that they’re part of this society.”

Despite experiencing racism here, Qureshi says Ireland is a “really good country for Muslims”. “When people ask me should they come to Ireland I tell them it’s super expensive but if they want to have a productive life in a place where people will understand them, they should come here.”

“Overall our life in Ireland has turned out well,” adds Younus. “There have been frustrations along the way but overall it’s been lovely. Both our daughters were born here and for them Ireland is nothing but home. We also feel it’s our home and that homesick feeling that used to hit hard every year is diminishing now.”