‘At what point is it okay for a black person to be Irish?’

New to the Parish: Linda Keitasha arrived from Uganda in 2002 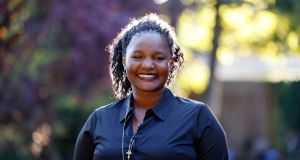 The first time Linda Keitasha spent Christmas in Ireland, away from her family, she didn’t realise all the shops would be closed on Christmas Day. The Ugandan student had only been living in the country a few months and most of her housemates had gone home for the holidays.

“In Uganda on Christmas Day everyone comes out; it’s a massive celebration. So when I woke up I went to the shops to buy something to eat but couldn’t find anywhere open. I spent that Christmas eating Hobnobs and drinking tea, which wasn’t very nice.”

Keitasha was 20 when she moved to Ireland to study journalism and media communications at Griffith College in 2002. One of 13 siblings, she was brought up by her grandparents and father, who died when she was 17.

“It was very tough but in Uganda it’s completely different when someone dies. You have this amazing community of aunties, uncles and neighbours who rally around and support you. I was so young I didn’t really grasp what it meant to lose Father. But it was difficult because he was our main breadwinner, which played into why we had to try and find a better life for ourselves. My brother now lives in California, my other brother in Qatar. We all had to make those choices.”

Keitasha chuckles as she recalls the naive woman who arrived in Ireland nearly two decades ago. “I thought I’d go abroad, make loads of money and be back in five years and be a billionaire. That’s what we all dreamed about. But it was very tough studying and working full time.

“I had lots of different jobs – you name it, I did it. It wasn’t about my career; it was about putting myself through college and trying to function.”

She missed home a lot when she first arrived in Ireland and struggled with the cold weather. “Nowadays people have social media; they can use WhatsApp to call home every day. But that wasn’t the case then, you had to buy call cards to ring internationally.”

In Dublin of the early 2000s, Keitasha was regularly the only black person in the bar when she went out with friends.

After completing her master’s, Keitasha struggled to find work in journalism and went into retail instead

“Back then I downplayed racism and discrimination. It was exciting to be here, and I thought this was what you went through as a migrant. I believed it was normal to have shitty jobs with shitty wages and be verbally abused at work. I was just trying to relish the experience and see the positive in situations. It was my coping mechanism.

“I was very conscious that I was different and found it hard to fit in. I didn’t understand the sense of humour and it was hard to make friends in college because everyone knew each from going to school together. I found Irish society very close-knit and it was hard to penetrate that.”

After completing her master’s, Keitasha struggled to find work in journalism and went into retail instead. “Most organisations were looking for unpaid interns and I had bills and rent to pay. I wasn’t only supporting myself, I had to send money back to Uganda for my younger siblings and my grandmother, who was unwell. It was the decision between my career or making money to survive.”

Keitasha left her job as a retail manager in 2008 when she gave birth to her son, Elijah, but struggled to return to work because of the recession. She returned to college to do a level 5 course in community development and started working in a youth club in Dublin’s inner city.

“That’s where I found my passion. I loved working with those kids, and it gave me a different perspective on life. That work rejuvenated me. I’d spent so much time working for money but had this dream I hadn’t pursued.”

However, finding paid work in community development was a challenge, and Keitasha eventually started caring for elderly people. She loved the job but found some agencies treated their staff badly. She tried speaking up about the zero-hour contracts but those in charge “wouldn’t have it”.

“All the jobs that don’t pay well and have bad working conditions tend to be populated by migrant workers. I worked with women who had degrees and master’s but they were carers because that was the only sector that would have them. People are unaware of the huge contributions of care workers. Without them the care system in Ireland would collapse. There’s an expectation in this country that migrants will take up these low-skilled roles.

“It’s important that the carers who look after our parents are treated with respect. It’s not just about clapping our hands during Covid and then forgetting about them tomorrow.”

She recently completed a master’s in international relations and now works as a community development officer with the Migrant Rights Centre Ireland, a job she loves. “It’s great to work in a place where my opinion is valid but also with an organisation that is committed to finding solutions to social injustice in this country. It challenges me. That’s something I’d been missing in my life.”

She no longer turns a blind eye to discrimination in this country and now sees racism “through the eyes” of her son.

“I don’t recall anyone ever calling me the N-word but my son was, by another child when he was eight. My son is an Irish boy; he was born in the Coombe and he’s only visited Uganda four times in his life. I don’t want him growing up in a society that sees him as other.”

She’s found many schools “downplay” racism among students while teachers lack the training to deal with it. “They hope if they don’t say anything it will go away. We know racism exists in Ireland but people don’t want to speak about it because it makes them uncomfortable.”

Keitasha became an Irish citizen in 2011 and says she loves this country. However, she is still regularly made to feel like she does not belong. “Everything I know, good or bad, I’ve learned in Ireland. I’ve spent almost longer here than I did in Uganda. Ireland has shaped the woman I am today but at the same time I’m constantly reminded that I’m not Irish. At what point is it okay for a black person to be Irish?”