New to the Parish: Rebeca Sanchez Gallego arrived from Spain in 2015 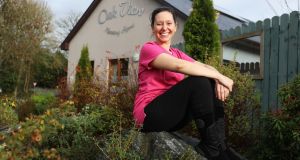 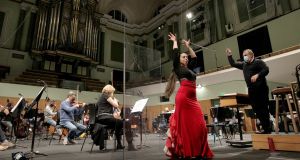 Rebeca Sanchez Gallego was a singer before she was a talker. The Spanish musician and healthcare worker was three before she uttered her first words through song.

“My mother would ask me questions but I never answered. She decided to bring me to singing classes to see what would happen and I started to sing straight away. After that I could speak.”

Born and brought up in Seville, Sanchez grew up surrounded by music. Her mother, who was unable to pursue her own career in flamenco music, encouraged her daughter to develop her musical talents.

“My mother was very happy for me. She said I could live the dream she couldn’t have. I did a lot of flamenco dancing competitions and learned to sing the traditional Andalusian copla. For me, music was everything.”

Alongside voice training with masters in flamenco music, Sanchez also attended dance classes. However, when she was 16, her life took an unexpected turn. Sanchez’s father’s death prompted her to look beyond music and consider a career healthcare.

“My father had always said being a nurse was a good career. He said if I left dancing or singing I’d have another option. So I studied as a healthcare worker.”

She moved to Malaga for university followed by a number of years working with people with disabilities in different parts of Spain. Sanchez then spent three years in Germany where she worked in a nursing home in Frankfurt by day and waitressed at night.

When the boss of the restaurant discovered Sanchez could sing, he insisted she perform to customers. “When I told him I could dance too I started doing shows for the music. He told me I was born to sing, that I shouldn’t be waitressing and working in a nursing home. But I told him I liked my job.”

When Sanchez returned to Spain she moved to Galicia in the northwest of the country and sang with an orchestra while continuing to work in healthcare. She also met her future husband, a vocal therapist who helped her to recover when she damaged her singing voice. Keen to further her career in healthcare while continuing her musical development, Sanchez started looking abroad for opportunities. She considered moving to London but then her husband suggested they try Ireland where he had spent time as a student.

The couple arrived in Dublin in November 2015, and Sanchez worked briefly in a Spanish restaurant before finding a job as a homecare assistant. She also paired up with a Spanish guitarist from Cádiz to play flamenco gigs around the country. She liked Ireland but struggled to settle in Dublin which she found to be busy and expensive. The couple considered moving south to be near the sea but then a client suggested they try Co Cavan.

In 2018, one month before their daughter Carolina was born, the couple moved to Belturbet where Sanchez had secured a job in a nursing home. “It’s a small place, it’s quiet but the job was just right. When our daughter was born all our new neighbours brought gifts saying congratulations. I know people in Dublin can be friendly but Cavan was so much better.”

Like all frontline workers, Sanchez’s work intensified during the coronavirus pandemic and she had to put her musical performances on hold. She was surprised, therefore, when in October she received a phone call from the RTÉ National Symphony Orchestra.

The orchestra needed a singer to perform El Amor Brujo – a musical suite by the renowned Spanish composer Manuel de Falla – and had contacted the Insituto Cervantes in Dublin looking for a performer. “I had sung at the Instituto and they recommended me. I thought it was going to be a studio performance but then she said it was live with an orchestra. This was just 20 days before the performance.”

Given the demands of work in the nursing home, Sanchez was unable to take time off to rehearse so practised the music while caring for residents. Unable to read sheet music, her method of learning was just to practise, practise, practise.

“That month was crazy for me. I was singing all the time and dancing during my breaks. People thought I was insane. My friends told me they’d heard of the conductor Jaime Martín but I didn’t want to know how big he was, it would only make me more nervous. I preferred to remain oblivious.”

To be honest I wasn’t nervous on stage. It was an amazing feeling. It was like I was back in Spain and really at home

Sanchez took annual leave the week of the performance and took three coronavirus tests – one upon leaving the nursing home, one before rehearsing with the orchestra and one before returning to work the following Monday.

She met with the conductor on the Tuesday, rehearsed with the orchestra on the Wednesday and had a photo session on the Thursday. “The only thing going through my head that whole week was the lyrics, the text and the music. Everyone knows El Amor Brujo in Andalusia; I remember my neighbour singing it when I was a child. But I was worried if I lost my place during the performance I wouldn’t be able to continue.”

On Friday, October 23rd, shortly after 7pm, Sanchez stepped on to the stage of Dublin’s National Concert Hall. Even though the auditorium was empty, she knew dozens of friends and family had tuned in to watch the live-streamed performance along with the hundreds of regular Friday night viewers.

“To be honest I wasn’t nervous on stage. I had been nervous in the rehearsal but Jaime and the musicians were great. It was an amazing feeling. It was like I was back in Spain and really at home.”

On the night of the performance she also received a video from her colleagues at Oak View Nursing Home wishing her well and has been sent dozens of cards from families with relatives in the home. “The nursing home is like my family here; I’ve received a lot of love from them. One resident calls me her little dancer now.”

While the pandemic has made work in healthcare extremely challenging, Sanchez is conscious that without coronavirus, she never would have been asked to perform with the National Symphony Orchestra. She’d like to perform with the orchestra again but doesn’t plan to leave her day job. “If you work as a professional singer you can’t care for people at the same time. Wherever I go I can sing and dance.”

Sanchez adds that she feels very settled in Co Cavan. “After five years in Galicia I felt like a foreigner but here I feel welcome. People here sing, they dance, they invite you into their homes. They remind me of the people of Seville.”

Rebeca Sanchez' performance of El Amor Brujo with the RTÉ National Symphony Orchestra and chief conductor Jaime Martín will be broadcast on RTÉ One on Sunday, November 29th at 10am.