New to the Parish: Sukrity Sharma arrived from Nepal in 2019 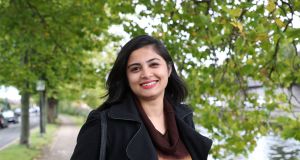 Sukrity Sharma moved to Ireland a year ago to study for a masters in journalism. Photograph: Nick Bradshaw

When asked what attracted her to study in Ireland, Sukrity Sharma answers without a moment’s hesitation. The books, the poetry and the playwrights, she replies. “Famous writers like Yeats, his poetry inspired me to come here. And Ireland had good opportunities for work and study, that’s why I came.”

The Nepalese student later reveals that it was, in fact, her father’s influence that led to her decision to move halfway around the globe to study journalism. The daughter of famous Nepalese-Indian poet Yuyutsu RD Sharma, who has travelled the world sharing his prose and poetry, Sharma says she felt drawn to follow in the footsteps of her father.

She recalls joining him on treks in the Himalayas where she watched him jot down words he would later read to international audiences. “I could see my father was always writing something. He is also a journalist and had written for lots of newspapers. It was him who suggested I come to Ireland, I actually didn’t know it existed. But when I read about this place and its poetry, I knew it was perfect for me.”

I was given the opportunity to go abroad and study; lots of women in Nepal never get that chance

Sharma had discovered, as she grew up, that women in her home country struggled to find career opportunities and develop their professional lives. “Nepal has always been a patriarchal society. Women are considered as wives and are not expected to work as much. Especially in remote areas, women are considered as objects of pleasure and seen as delicate. It’s very hard for a woman to reach a high post in Nepal, you have to fight your way there.”

Having worked with an NGO supporting women who are trafficked, Sharma was also conscious of the privileges she had in her own life. “I was given the opportunity to go abroad and study; lots of women in Nepal never get that chance. I hope to bring something back from my time in Ireland, to help empower women in Nepal.”

However, the reality of living in a strange country thousands of kilometres from loved ones was not quite what Sharma had imagined studying abroad would be like. She arrived in Dublin in September 2019 ready to embark on a year-long master’s in journalism and public relations from Griffith College. After a lifetime of living at home in Kathmandu with family, being in Dublin was not easy.

“In Nepal even adults live with their families, it’s not like western countries. It was my first experience of living alone, and that led to a lot of anxiety. I felt depressed and settling in was hard.”

After briefly staying with a Nepalese family, Sharma found a waitressing job to pay for rent in shared accommodation. She started questioning her decision to move to Ireland and cried herself to sleep each night.

“I felt like I was broken inside. I kept moving houses because the rent was so expensive. In one house, the tenant advertised the room against the will of the landlady and she then kicked me out. I was homeless for two days. It was difficult moving all the time, I was in complete breakdown, I was a mess. At the same time I had to keep going to college and do assignments and presentations. I lost all my self-confidence and felt completely useless.”

Sharma’s father advised her to stay strong, that possibilities would come her way, while a friend reminded her that everyone faced challenges when moving abroad. “She reminded me that crying wouldn’t solve anything, that everyone is facing problems and instead of crying I should find a solution.”

Sharma was working in a Spar deli when Covid-19 arrived in Ireland and briefly signed on to the Covid-19 payment in July after losing her job. At the time of this interview, which was before Level 5 restrictions came into effect, she was back working as a waitress in an Indian restaurant.

Having completed her master’s degree, Sharma started applying for journalism internships with Irish media companies, undeterred by the challenging climate she’s living through. “I think journalism is a very powerful medium; it gives you a voice. I’d also like to earn the money to bring my family here for a trip. I’ve always wanted to do that.”

In 2019 I regretted coming here. But I’ve learned so much and met new people and that helped me to be stronger

Having blogged about her experiences over the past year, she now plans to write a book about moving abroad as a young woman. “Through my experiences they can gain knowledge of how to live alone. For a person who is dependent on their family, all of a sudden you’re thrown into this big world with no one to help you. I don’t want people to get lost like I did.”

Living in Ireland has also helped the 29-year-old develop a new appreciation for her home country.

“Nepal is a small country but, from my point of view, it’s the most beautiful place in the world. The moment you land there you fall in love with the people and the environment. In Nepal we have Hinduism, Buddhism, Islam, Christianity, our religions live in harmony. India was ruled by the British but we were never ruled by a foreign power. That’s why we can live together. Now I always dream of going back to Nepal where I can properly start my own career.”

But for now, Sharma plans to stay and find work in Ireland. She admits she’s still struggling to settle in this country but has learned a lot over the past 14 months.

“In 2019 I regretted coming here. But I’ve learned so much and met new people and that helped me to be stronger. I’ve learned to be patient and work hard and to know you have to survive on your own. I recently had a bad break-up but I’m still strong and I’m determined to stay here.

“I want to prove to myself that I can do this. There are millions of people around the world like me suffering, I’m not a special person. Everyone has tough times but I’m tired of complaining. Actions speak louder than words.”