‘I’m trying to find where I fit here in Ireland’

New to the Parish: Joe Donovan arrived from the US in 2018 after his parents’ deaths 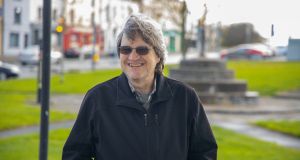 Joe Donovan has spent most of his life on the move. Born in California and brought up in Utah, he joined the US Marine Corps after school which brought him to Japan for a couple of years, before relocating back to North Carolina. Two years ago, when he decided to try living in Ireland, moving across the Atlantic Ocean didn’t feel like such a bit deal.

“Moving has been a part of me since day one. As a child I had no qualms with moving from state to state, and then I had the military. I had learned how to adapt to new places. That is probably the biggest strength I got from my childhood; I learned to be adaptable.”

The grandson of a Cork man, Donovan describes himself as “a middle-aged US/ Irish citizen by descent” before adding that he prefers the term “an immigrant with an Irish name”. Despite his personal interest in his family’s Irish roots, his parents rarely mentioned their ancestral links to this island.

His mother developed postpartum psychosis following his birth more than 50 years ago and went on to suffer schizophrenia for the rest of her life. Six years after Donovan was born, his parents split up.

“I spent the majority of my childhood living with my mum. I kind of became the adult of the family and had to step into that role. The concerns about my mum’s health nagged me for years.”

His father never spoke about visiting family in Ireland. “I don’t think he ever felt any connection to here. He was the son of an immigrant and became a right-wing entrepreneur, that older sense of being right wing. He wanted to be successful. He never really achieved it but he tried hard.”

After a stint with the marines, Donovan worked in computer programming for 15 years in North Carolina. When he was 39, doctors discovered a tumour in Donovan’s pituitary gland and he had to undergo surgery. Six years later the tumour returned and he had to go through surgery again. He went on to develop a number of health conditions including Addison’s disease, a rare disorder of the adrenal glands.

“I realised I couldn’t continue to work the way I used to, I couldn’t keep up, so I sought disability support.” He started spending more time with his mother and tried to track down his father who he had lost contact with. He also became involved in advocacy movements around mental health and disability issues.

In 2017, his mother died of a heart attack. Three months later, he discovered his father had died a few years before.

“I understood grief before my mother died. I’d already grieved what she couldn’t be for me, what I needed her to be. I’d processed a lot of grief before that point.”

Even before his parents’ deaths, Donovan had started researching his family background. However, the discovery that his father was also dead prompted Donovan to seriously reassess his future plans.

“I was looking at what my options were for the next 20 years or so, and Ireland just grabbed my attention. I wanted to find somewhere to live with a slower pace. I already received a monthly cheque for my disability from the US government and lived a modest lifestyle. So I took a two-week trip to Cork in 2017 to see if I could make it work here.”

Six months later, with his recently acquired Irish passport in his pocket, Donovan packed his bags and flew back to Ireland. At Cork Airport’s passport control, he handed over his shiny, new travel document to the border official. “When I showed him the passport the guy said ‘welcome home’. That kind of caught me off guard because I’d never thought of Ireland as home. But I did from that point.

“My home had generally been wherever my mum was, it was the place I had to go back to. I guess that’s one of the reasons I needed to find a new home after her death.”

With family links in the county, Donovan planned to settle in Cork city. However, he struggled to find long-term rental accommodation and eventually moved east to Waterford.

Two years on, Donovan says settling into his new home is still a work in progress. Given his underlying health conditions, he has spent most of the past seven months indoors adhering to Covid-19 restrictions and is struggling to build friendships in Waterford.

“Building that Irish connection is difficult. I had met a few people before Covid but you know when you meet the people you’ll spend years hanging around with? I haven’t got that yet. That takes a while. I’m not really a big pub goer which seems to be the central way to meet people here, so that’s a problem.

“It was the same when I moved to North Carolina, that too was a very closed community. I had to live there about five years before I finally started breaking through to the locals. I knew it would take some time.”

He says people often presume he’s a tourist but is keen to point out that he is an immigrant, just like the thousands of others who move to Ireland each year for a new life. “One aspect of my identifying as an immigrant is I realise people who have moved here may have faced many more obstacles than I have. This is one small way that I can stand in solidarity with them.”

He’s following the 2020 US presidential election from afar and is keen to see Donald Trump – who he describes as “an idiot and a racist” – leave office. “This will probably be the last US presidency that I’ll actually be concerned about. I think in four years I’ll be much more connected to the local Irish community and more focused on local issues and local politics and maybe even understand European politics.”

Donovan is also keen to get back into working for NGOs, doing similar work to the advocacy projects he was involved in before, but has struggled to find suitable positions. However, despite the obstacles he’s encountered, he’s glad he moved to Waterford. “I’m fairly comfortable where I’m at, I’m very content. I’m just trying to find where I fit here in Ireland.”