‘I’ve been in Ireland during a real cultural shift’

New to the Parish: Tari Takavarasha arrived from London in 2017 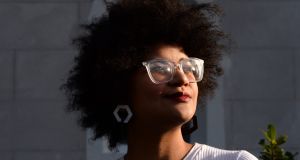 Tari Takavarasha was never conscious of her English accent until she moved to Ireland. Growing up as a person of colour in rural England in the 1990s, she learned at an early age how it felt to be judged on the colour of your skin. It wasn’t until she came to Ireland, however, that she learned of the weight her accent carried.

“I’ve never had my English voice come before my black skin. There is something particularly galling about someone having a go at me about British oppression. How do I wrap my head around that? Being the only person of colour in a group and having people tell me that my queen crushed them. I do understand the anger at the British, but I just really think I’m the wrong person to aim it at.”

The belief among some Irish people that they have a deeper understanding of discrimination than other white people is also frustrating, says Takavarasha. “I’ve had Irish people tell me they know what it is to experience racism. They’d tell me they were the first slaves. To hear that being said by middle-class people sipping cocktails made me angry. I think sometimes people wear oppression as if it’s fashionable.”

Takavarasha describes her childhood in the city of Worcester and the surrounding countryside as a “strange experience” where she often met children who had never seen a person of colour before. Her father had moved to England from Zimbabwe in the 1970s but rarely spoke about his ethnic Shona heritage.

“My dad almost completely separated himself from his background and didn’t teach me any Shona. But he came from a very large family and I wanted to meet those people. I went out of my way to learn about it. I wanted to explore what it meant to be an immigrant and have an understanding of the language and culture.”

When she was 23, Takavarasha travelled to Zimbabwe for the first time. “I’m so glad I did it. It was a unique, terrifying, strange and beautiful experience and created a huge culture shock in both directions.”

Having studied English at university, Takavarasha spent three years in Bristol before moving to London, where she worked as a data analyst in the city. She recalls with clarity the growing tension and division that spread across the UK in the lead-up to the 2016 Brexit vote.

“There was this whole argument that we’re losing our British values because there’s a Polish section in the supermarket. This pissed me off so much because I actually know what losing a culture looks like, what it feels like. I’ve never been able to have a direct conversation with my grandmother [in Shona].”

While she felt solidarity among her peers in London, the public sentiment was often ugly. “The day after Brexit happened I was in Clapham having brunch with my goddaughter and this man shouted at me, ‘Aren’t you supposed to have gone by now?’ He laughed. I guess he thought it was funny.”

Racist incidents were on the rise, and many of Takavarasha’s friends were leaving to work elsewhere in Europe. Disillusioned by the referendum result, and also motivated by a sense of “itchy feet”, she started applying for jobs abroad and was offered a position in Dublin.

Some of Takavarasha’s friends warned her that Ireland would be very different to life in the UK and expressed genuine concern about how she would get by without speaking Irish. Unperturbed, Takavarasha packed her bags and arrived in Dublin in summer 2017.

Having already started writing and performing poetry in London, she attended open mic nights to meet people. “I think Irish artists really support each other. I found there was a real space and recognition for the arts. The London spoken-word scene is different; in Ireland it comes more from a place of storytelling.”

Although she did interact with Irish people, most of her new close friends came from abroad. “A lot of my friends here are people of colour and they tend not to be Irish. People say the Irish are the most friendly, but it’s difficult when you don’t know anyone and you have an English accent. I also think Irish people can be quite cliquey.”

At first she found Dublin very similar to the English cities where she had lived before. However, as time went by and she visited different parts of the country, she discovered “noticeable differences” with the UK. She was struck by the strong presence of the church in Irish society and found Catholicism “still informs much of Ireland”.

She learned of Ireland’s “shocking history of mistreatment of women” and took offence when judgments were made about the women in her own African background. “I will not sit by and have somebody talk about the poor downtrodden African women. Women have always had equal rights in Shona culture. Don’t you know how hard it was for women in Ireland 20 years ago?”

Through her involvement in spoken word events she met a young Zimbabwean-Irish woman called Kayssie at an event in Poetry Ireland. The pair started working together and received a grant to perform at the International Literature Festival in Dublin. They originally devised a live performance set to take place in May, but the two women ended up filming their stories on the stage of the Axis Theatre in Ballymun, which was later streamed during the festival’s online programme in October.

Takavarasha delved deep into her own personal history for the performance, learning from family members about Shona storytelling. “It was a piece about immigrant identity and I found it really enriching. I learned so much about my family from doing it and my Shona is much better now.”

She has started feeling the itch to move abroad again but she is settled and happy in Ireland. “Anyway, making plans at this moment in time is just a fool’s errand,” she says.

She has watched Irish society evolve during her three years here and is grateful to the country for giving her a chance to “flourish in my career and my art”.

“A lot of people in the UK think Ireland is very conservative but now I tell them ‘No, it’s not’. I feel like I’ve been in Ireland during a real cultural shift, and it’s been very exciting. Seeing this country ask itself ‘Who are we now?’, there’s something quite joyous about that.”