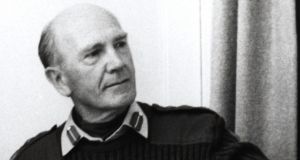 Lieut Gen James Parker oversaw the introduction of some of the most significant changes to the organisation and management of the Defence Forces since independence.

The life of Lieut Gen James (Jim) Parker, who has died aged 91, tracked the trajectory of the Republic over the course of the second half of the 20th century.

He joined the Army as a cadet at the Curragh in 1948 and rose to become chief of staff of the Defence Forces in 1989.

His career was a bridge from a time when postwar Ireland was isolated globally, cut off politically and economically to a large extent from the outside world with little prospect that a young Army officer would see, for example, foreign service, to a situation when, by his retirement in 1992, Ireland’s service personnel were serving in many parts of the world.

In Gen Parker’s case this included, successively, as assistant intelligence officer with 35 Infantry Battalion ONUC in the Congo in 1961, in Cyprus as operations officer, 9th Infantry Group in 1967-1968, as commanding officer with the 26th Infantry Group in the Sinai, Egypt, in 1974, as a military observer in the Middle East with UNTSO from 1977 to 1979 and in Lebanon at Unifil headquarters, where he was the most senior Irish officer during 1984-1985, and finally from 1987 to 1989 as a United Nations chief military observer in India and Pakistan.

Each of these very challenging positions made demands on not only his military skills but also his diplomatic skills as a particularly level-headed officer operating in often hot-headed situations.

At home in Ireland, Parker served in a range of units and roles throughout his career, including as o/c, 4th Infantry Battalion, instructor at the Military College in the cadet school, the infantry school and the command and staff school, as second in command of Western Command and Curragh Command, and finally, before becoming chief of staff, as adjutant general (ie officer in charge of administration).

since independence, following the publication in 1990 of the Gleeson commission’s report (chaired by Dermot Gleeson, SC, later to serve a term as attorney general) into remuneration and conditions for Defence Forces personnel in 1990.

The commission, established by the then minister for defence, Brian Lenihan snr, the previous year, saw the establishment, for the first time ever, of representational bodies for serving personnel, such as PDFORRA.

Also marking a significant point of change, the same year, 1990, saw the creation of the joint civilian and military project to develop information technology in the Defence Forces and the State sector generally. Both events, the Gleeson commission report and the IT project, reflected the need of the Defence Forces to adapt to social and scientific change, both significant managerial challenges for Parker of a type which few, if any, of his predecessors had had to address.

Another significant moment during his three years as chief of staff was his address to the senior military personnel of the Conference on Security and Co-operation in Europe in February 1990, when he defined Ireland’s policy of military neutrality in strikingly clear, and perhaps, from today’s perspective, historically interesting language.

“Ireland has chosen to base our security on the promotion of an international climate which would make belligerency redundant . . . we believe that the belief that security can best be achieved through military strength is mistaken, and can only give rise to a perception of threat by the other side,” although he acknowledged the complexities of such a stance by adding that “a nation’s military doctrine cannot be isolated from its political values and goals,” something of enduring relevance, arguably, at this juncture in the challenges faced by the European Union.

Expanded horizons Parker’s career mirrored the other major change in this country’s life in the same period, namely the expansion of the horizons and opportunities for the vast majority of people, a process which might be said to have been exemplified by his own personal journey.

This started in Mitchelstown, Co Cork, as one of the 11 children of Edward and Nora (née Sheehan) Parker, who were not at all privileged people in the material sense; in a tribute to his father, which has been shared with The Irish Times, his eldest son Eamonn remarks that his father “was proud of his humble origins, and how he grew up in a very simple rural setting, running to school, playing handball with the local curate for pocket money, [and] working for the Christian Brothers to put himself through secondary school”.

His experience of particularly the church and the Christian Brothers paints an alternative picture, perhaps one unjustly overlooked, to that which has emerged of traditional Irish society in recent decades.

Always very keen on sport, he won a senior county medal for Gaelic football with Collins’s GAA club in the Munster finals of 1953, was an All-Ireland club finalist at squash in the 1960s with the Curragh club, and sank a hole in one, one of three in his golfing career, at Curragh golf club at the age of 86.

Keen also on education, he took a night-time degree with fellow officers at UCD in 1973 in economics, history and archaeology, the latter a particular fascination to him which he put to good use during his time in Egypt the following year. An avid gardener and bee-keeper, he grew many of his own vegetables, and made his own marmalade.

A committed Christian, he was an active member of his local branch in Newbridge, Co Kildare, of the Society of St Vincent de Paul, and served on the committee of the Ryan’s Field sheltered housing project in the town.

Jim Parker is survived by his six children, Eamonn, Billy (Liam), Siobhán, Colman, Ciaran and Diarmuid, and by his sister, Nora Kearns. His wife, Breeda, née Roche, predeceased him.

Readers on overseas travel: ‘I am responsible enough to go and manage the risk of Covid’
7