Joseph G Geary obituary: Retired accountant and still a keen golfer as he approached his 90s

Lives lost to Covid-19: Keen sportsman and member of the Limerick family who ran the well-known Geary Biscuit Factory 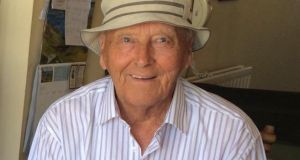 Joseph G (Garry) Geary was a member of the Limerick family who ran the well-known but since closed Geary Biscuit Factory at Merchant’s Quay in the city, though he had no involvement with it himself. Known as Garry he began working as a chartered accountant with the William O’Donnell firm in the city. He became a partner as it evolved through many takeovers down the years.

One of seven children, he was a natural teacher who trained “hundreds” of accountants in Limerick, including his niece Siobhán, who recalls his “terrific work ethic and dry sarcastic wit. His standards were high and he wasn’t easily pleased but upon ‘graduation’ from his training, everyone acknowledged that they had a grounding that would serve them well throughout their careers”.

He was also a much-trusted uncle “with a sensitive ear who gave good sound advice and no one would know anything about it. He was so discreet”. There were “countless stories about his generosity and how he was there for others. He will be remembered by many generations of his family who know they have much to thank him for,” recalls Siobhán.

Sport was his thing. In his early years he played rugby for the Jesuits at what is now Crescent College in the Munster Senior Cup and was Irish youth 100 yards and senior 300 yards champion. He represented Ireland in the World Catholic Student Games one year.

In later life he turned to golf, joining Limerick Golf club in 1952. With the same application he brought to most things, he became very good very quickly due to endless practice which would continue throughout his golfing life.

“He was a great competitor and his fellow senior golfers knew they had to play really well to beat him, even as he approached his 90th birthday,” recalled Siobhán. “He and my father [Gould] would meet a couple of times a week and fight about the by-laws of golf, endlessly.”

Garry was a member of the team that won the Irish finals of the 1967 Barton Shield and went on to win many different Munster titles with the club. Later in his life he represented Ireland at senior level and even went on to become Limerick club president in 2001.

He was also a man who took his religion seriously and his faith helped him greatly as he battled illness in those later years.

Last month he contracted Covid-19 and died peacefully at Limerick University Hospital on May 9th. After a private funeral he was laid to rest with his mother and father.