Sean Moncrieff: Any eejit can set up a social media account. And many do

Social media is addictive. It makes our kids anxious. It spies on us. We regularly see forgeries and bare-faced lies 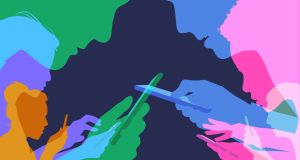 Social media has many good aspects, but it mass-produces lies. It’s the McDonalds of mendacity.

In Ireland, the we’re-invaded-by-foreigners cohort is represented largely by anonymous accounts. Invariably, they self-describe as ‘patriots’ and often choose homo-erotic pictures of mythical Irish figures for their avatar.

Each one seems to have its own special collection of public figures to hate, to project all their feelings of victimology and self-loathing. And they can say whatever they like.

One recent instance: the film director Lenny Abrahamson appeared on RTÉ kids. Afterwards, a Twitter Patriot put up a screen shot, along with the caption: ‘Hey kids, want to make movies when you grow up? All you need is: Ethnic connections to a wealthy global elite.’

Lenny Abrahamson doesn’t raise money for his films. He’s a director, not a producer. But even if he did, the notion that he’d simply ring up one of the Rothschilds for the cash would be laughable, were not it not for the naked anti-Semitism at the core of the tweet: and that several other Patriot-Tweeters seemed to believe this was plausible.

Posts like this can be reported. But it takes time, and even if an account is suspended, the person can quickly set up another and get back to race-baiting.

The problem is the sheer volume of this stuff. Social media has many good aspects, but it mass-produces lies. It’s the McDonalds of mendacity.

And it comes from all shades of opinion: during the protests – and riots – over the death of George Floyd in the US, Antifa protestors did not leave piles of bricks lying around – despite ‘evidence’; Donald Trump’s tear-gas aided photo-op outside St John’s Church in Washington was not based on a picture of Hitler – despite ‘evidence’. And of course, Donald Trump has had his own difficulties with Twitter and Snapchat, which have both taken steps to constrain his more inflammatory comments.

Trump and his supporters responded with the predictable tantrums to this, but the floor-stamping did do something useful by raising the issue of how social media should be regulated.

Does social media do more harm than good? It’s addictive. It makes our kids anxious. It spies on us. We regularly see forgeries and bare-faced lies; and are regularly taken in by some of it.

The problems of our world are due to many factors, but in all cases, social media acts as an emotional amplifier. Every problem is made more urgent, more dystopian – more difficult to solve. Everyone is angrier, more abusive, and more willing to dehumanise other people.

Obviously, the highly-lucrative genie is out of the box here: social media can’t be done away with; and it would be sinister to make that suggestion. It would also be grossly unfair to the billions around the world who use it for valid, reasonable purposes. It would also be sinister (and impossible) to limit what subjects it can be used for.

Anyway, you can easily make the argument that what happens on social media has always happened; people have always had a range of views, from the inspired to the bonkers, and people have always vehemently disagreed with those views. It’s been happening in newspaper opinion and letters pages for hundreds of years.

But there is a key difference; in those forums, the opinions usually have a name attached to them. The editors of these pages will make sure that the correspondents are who they claim to be. So why would this be outside the abilities of social media platforms?

It’s not a perfect solution, but at least having to put your name to an opinion automatically makes you responsible for it. Having the electronic equivalent of a balaclava over your head frees you not just from identity, but from having to think about your words.