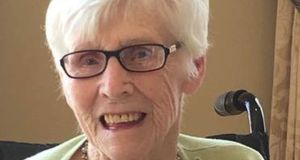 Anna O’Sullivan (née Reilly), who died from Covid-19 in Beaumont Hospital on Friday, May 15th, would have been 100 years old if she had lived until November 1st.

A native of Lavey, near Stradone, Co Cavan, she worked in North Middlesex Hospital in London during the Blitz, having gone to England at the age of 19, first to train in Liverpool, and then to work in London. She later remembered how she’d lie in bed at night, hearing the bombs falling through the sky. One night there was a direct hit on the children’s ward of her hospital.

Anna didn’t like to talk much about the war years, according to her daughter, Jacqueline Buckley. “It was a bad time, of course, for anyone working in a hospital.”

Michael was a native Irish speaker from Co Kerry and after they got married they moved to Tralee, where Michael worked for Roinn na Gaeltachta.

Their first children were twins, Josephine and Maria, but Maria died after just a few days. Then Jacqueline was born, and after her, Philomena. Philomena had cerebral palsy, and passed away at the age of ten.

After Michael retired in 1978, he and Anna moved to Leixlip, Co Dublin, to be near Josephine and Jacqueline. Michael died in 1980 and five years later Anna moved in with Jacqueline and her family.

“She helped raise my three children,” says Jacqueline. “She was a second mother to them. She was great, and they loved her.”

She was also a loving, caring and doting grandmother to her six grandchildren, and became a great-grandmother in October of last year.

In March 2016, Anna moved to the Maynooth Lodge nursing home. In March of this year Jacqueline got a call from the home to say her mother wasn’t well, but she wasn’t able to visit her, as visits had been cancelled. On Friday, May 8th last, Jacqueline visited Anna in the Co Kildare home, at the suggestion of staff. By this time her mother had been unwell for a week.

“It was the first time I’d seen her, physically, since early March, because of the lockdown.” Jacqueline had to wear a mask, gloves and a plastic apron.

Anna was later moved to Blanchardstown Hospital, where she tested positive for Covid-19, but Jacqueline didn’t visit her there.

“They offered, but they also said it was high risk. I had my husband and son in the house, and I considered it, but [Anna] wasn’t conscious at that stage, and I felt the risk was too great, going into a Covid ward. It was a difficult decision. We weren’t able to be with her at the end. It is very hard still to come to terms with the fact that she is actually gone.”