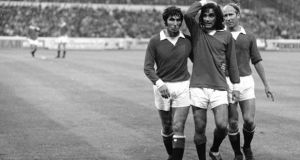 There is a good deal of “simpler times” charm to many of the stories that have been told about former Manchester United and Republic of Ireland footballer Tony Dunne who died aged 78 on June 8th but there is an unmistakable sadness too that such a great player could have been left so disaffected by the way the best part of his great career ended.

Born on the Southside of Dublin, Dunne came to prominence during a two year stint playing at Tolka Park in Drumcondra for Shelbourne who he joined as a teenager in 1958. Manager Gerry Doyle sought to promote young talent and the policy began to pay off when his team won the FAI in Cup in May 1960.

By then, Dunne had committed to joining Manchester United. The English club’s famous manager, Matt Busby, had travelled to Dublin to sign him shortly before the final but the talks were initially held up by the fact that the player, unaware he was coming, had gone to the cinema with his girlfriend, Ann.

In an effort to get him out, a request for Dunne to go to the foyer was projected onto the screen but he somehow missed it and Doyle had to sit outside in his car, waiting to whisk the young defender away to the negotiations. Dunne said of the incident that he would otherwise have been giving Ann a crossbar home on his bike.

He was, it seems, signed as cover for two other Irishmen, Shay Brennan and Noel Cantwell, something reflected in the fee of £5,000 at a time when the record in England had just been set at 11 times that amount. He started slowly enough but he would eventually eclipse them both.

He made his first team debut that October but it would be another year or so before he really established himself. After that, though, he came to be regarded as one of the best left backs in England; the very best in Europe according to his team mate, Bobby Charlton.

He won an FA Cup with the club then two league titles and, most famously, the European Cup in 1968. That victory over Benfica was a personal triumph for Busby who had successfully rebuilt a team ravaged by the Munich air disaster and players like Dunne, who he had plucked from relative obscurity, repaid the faith he had shown in them with great loyalty.

The Dubliner was quick, strong and renowned as a great reader of the game, something he won acclaim for in the European final at Wembley. He also put his body on the line in a way that would be pretty much unthinkable in the modern era. Asked by a British newspaper in 2011 about his least favourite ground, he chose West Ham’s Upton Park because he broke his jaw and wrist there over the years as well as sustaining an eye injury when blocking a shot from Geoff Hurst.

Even during the best years of his career, though, he earned barely twice the average wage of a British worker and the club, like so many at the time, could be inexplicably mean-spirited.

Despite the tough-tackling nature of football then and his own committed nature, Dunne rarely missed games through injury and when appearing in every league match one season reportedly earned him a substantial bonus, the club gave him a £10 a week raise for the following campaign, from £30 to £40, but slashed the potential lump sum.

He was upset about the way he was moved on from the club in 1973. New manager Tommy Docherty was dispensing with several of the celebrated old guard, but after 13 years, United demanded a fee which undermined his own negotiating position.

The hurt was clearly compounded when he sought to organise a testimonial game that had the potential to generate considerable funds. The club were, it seems, of little help when it came to organising attractive opponents and charged him £1,500 for using Old Trafford. Busby, no longer manager but still hugely influential, did not do nearly enough, he felt, to support him.

There were similarities in it all with the way Roy Keane would depart 32 years later, feeling cast aside despite all he had contributed and the loyalty he had shown a great manager. The Corkman, though, did not have Dunne’s financial concerns as he departed.

He played on for six seasons at Bolton Wanderers before ending his playing career with a short spell in America. He tried his hand at management and did some media work but eventually settled into running a driving range in Altrincham, Greater Manchester.

He declined to write his memoirs despite offers to do so because, he said, he did not want to “dwell on things that were not important”. His refusal of an invitation to attend the 1999 Champions League final in Barcelona as a guest of United, however, suggested that he did not see his history with the club as an entirely trivial matter.

In 2011, though, the club bought his medals at auction for £44,000. He was, it seems, selling to avert what was described as a family crisis.

In total, he played 535 games for United, leaving him eighth on the club’s all time appearance list. At the same time, despite his ability, he managed just 33 times for Ireland something Busby apparently complained about despite having contributed to the limited number by sometimes discouraging Dunne from travelling at a time when it was more difficult and the association here did not look after the players well.

He is still remembered fondly for Shelbourne where his one goal was scored while he limped through a game with a serious injury. He went on to become one the English game’s greats but one who was rarely remembered in his later years as one of its brightest stars.

He is survived by his wife, Ann, and their children Tracie, Lorraine and Richard.